Like most parents of children too young to prove otherwise, I am convinced that my kids are geniuses.  Possibly even evil geniuses.  Time will tell.

I have no doubt that anyone who meets Sutton can see what I’m talking about.  At a mere two years of age, she’ll proudly spout off her alphabet, along with the corresponding sound each letter makes and a fruit, vegetable or animal whose name begins with that letter, before reciting “The Very Hungry Caterpillar” and/or “Madeline” verbatim, off-book.

Bennett doesn’t do those things.  He doesn’t strike up conversations with adults.  He won’t sing along with a song the second time he hears it, somehow retaining all the lyrics.  He doesn’t repeat back what Dora asks him to.  And when he does talk, the sounds that come out of his mouth may carry only a vague resemblance to actual English language words.

But don’t be deceived.

If you spend enough time with Bennett, you realize that he simply chooses carefully when and what to speak.  He is a master of linguistic economy, conveying with a few simple sounds what Tolstoy or Dickens might take an entire novel to express.

I hereby present to you a quick rundown of some of the boy’s most commonly uttered words and phrases, along with a translation.  Consider it your Bennett Babel Fish. 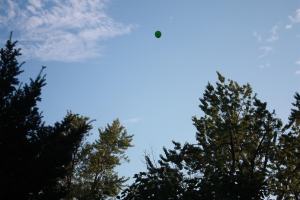 2) “I recognize that place.  We bought a balloon there three months ago.  I’d like to go there right now and buy another one. ”

Or simply…  3) “Aren’t balloons nice?  I was just thinking about them.”

Bennett means: “I don’t want to eat this.  I’d use another of my words, ‘Gwuss!’, but I know then you’d just insist that I try it.  So I’m saying ‘hot’, because then you’ll let me push it away.  Yes, I know this sandwich is not actually hot, but I’m very persuasive.  Trust me, this is going to work.”

Bennett means: This might seem straightforward, but here, Bennett is not just saying, “Daddy”.  More specifically, he’s saying, “That Daddy!”  With the most subtle of inflections, Bennett is able to convey exactly which Daddy he is referring to.  In our house, this is no easy feat. 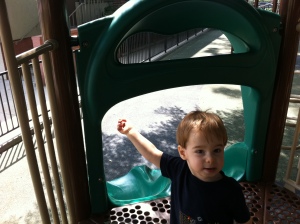 Bennett means: “This is the spot on the playground where we saw a spider several weeks ago.  He was quietly spinning a web, and it was the most beautiful and poetic thing I’ve ever seen.  Ah, but memory is so flighty a mistress.  Spider, where hast thou gone?” 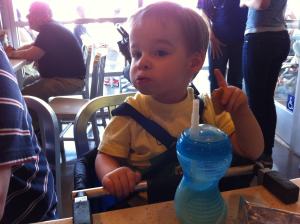 Bennett means: “Me!”  To the casual observer, it might appear that Bennett is mixing up his pronouns.  Nothing could be further from the truth.  This is his attempt to make each of us question our own identity.  Who are any of us really?  You?  Me?  Are they not just two words to identify souls we can never fully hope to understand? 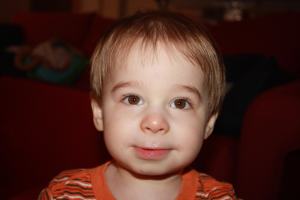 Bennett means: “You!  Come turn the television on for me.  I’m very close to being able to do it without your help, so I assure you, these requests are only temporary.” 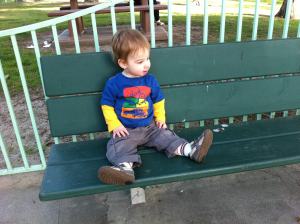 Bennett means: “I’ve figured out where we are.  The park is that way.  Why aren’t we going that way, toward the park?  That is the way I’d like to go.  I will repeat myself as many times as I need to until you realize you’ve missed the turn for the park.”

Bennett means: “Elmo!”  This one has been perfectly clear for a long time now.

3 comments on “Understanding My Evil Genius”