One of the reasons I wanted to write this blog is to assist other gay couples who want to have kids.  It’s not easy and it’s not cheap, but with a little knowledge and a lot of perseverance, there are any number of ways it can be done.

So at times, I’ll put up an informational post about Makin’ Gaybies.  This one’s about some reasons you might want to consider surrogacy, which is how my boyfriend and I had our kids.

I’m by no means an advocate for surrogacy.  Everyone needs to do what works for them, and everyone’s situation is different.  But surrogacy is probably the most misunderstood way to have kids, and being that it worked so well for us, I felt an obligation to show the positives.

Yes, surrogacy is expensive.  All in, it cost us about $150,000.  I’ll give you a moment to take that in.  It’s a big number.  It’s a terrifying number.  And you have to have all that money up front, in cash, before you can even get started.

Still, it’s cheaper than buying a house in LA.  So we chose to have kids first and to buy a house… someday, maybe, hopefully.  That’s why there are now four of us crammed into a two-bedroom condo.  But we couldn’t be happier with our choice.  (Besides, adoption isn’t cheap either.)

And the benefits of having our kids through surrogacy were enormous:

1. The fetus is legally yours from the start.

This is huge, and no other means of having a child can promise you this.

We’ve all heard the horror stories about birth mothers who change their mind in the delivery room and decide to keep their baby.  Then, the would-be adoptive parents are forced to go home empty-handed and cry in a beautifully decorated nursery which might never get used.

Well, that doesn’t happen with surrogacy — because it’s your baby, not hers.

I should be clear that I’m talking about gestational surrogacy.  In that arrangement, the surrogate is not using her own eggs.  There’s a separate egg donor.  So the surrogate has no biological connection to the child and thus feels less of a bond to him or her (or in our case, them).

Tiffany holding Bennett in the hospital

She also signs a mountain of paperwork stating that she doesn’t want — and can’t have — your child.  When the twins were born, Drew and I were listed as their parents on the birth certificates.  Neither of us had to go through any adoption procedure, and our surrogate, Tiffany, didn’t have an opportunity to keep the kids.  She was sent to a recovery room with her husband, and the babies came to another room in the delivery ward, where Drew and I took care of them.  We all got to enjoy the moment for what it was, because legally, everything was already settled.

2. You can go to all the appointments.

I’ll never forget the day the doctor told us about the fluid in Tiffany’s uterus and how much danger it posed.  We were six weeks along, and he put the odds of Tiffany carrying the pregnancy to term at 50/50.

He also told us, at that same appointment, that we were having twins.

Being pregnant is rough, and it’s full of moments like these, ups and downs, thrills and panic, a million little bumps and big bumps along the way.  And Drew and I lived through it all.

We crammed into every ultrasound room, we watched the fetuses grow week by week, we were the first ones to hear that we were having a boy and a girl.  We were at our surrogate’s side – and our kids’ – for every important moment, from before conception all the way through delivery.

When our kids caught their first glimpses of the world, we were there. 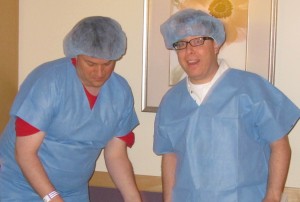 Right before the big moment

And we never felt like intruders.  We were welcome everywhere we went.  Our surrogate was thrilled to share these moments with us, because they reminded her constantly of why she was doing this amazing thing.  Our joy was her joy, and we formed a very special bond with her throughout the process.

No matter how you make your gayby, you can’t grow him or her in your own uterus, because you don’t have one.  This is another way surrogacy works in your favor.

I remember a friend telling us that his son’s birth mother chain smoked all through her pregnancy.  She didn’t even try to hide it.  She didn’t have to.  It was her fetus.  There was nothing he could do to stop her.  In an adoption arrangement, the birth mother is in no way accountable to you, because it’s her child until she declares otherwise, usually following a waiting period after delivery.  (And let me say, I’m a big supporter of waiting periods, for the birth mother’s sake.)

A surrogate could never get away with that.  She’s tested regularly for drugs, alcohol and nicotine.  She has an obligation to take good care of your fetus.  She agrees to it up front.

Ultimately, you’re still at her mercy to some extent, but until you can grow a uterus of your own, this is the next best thing.

4.  Your relationship with the surrogate can be as open as you want it to be.

Most surrogates, from what I’ve heard, would like to be on your Christmas card list.  They enjoy getting an annual reminder of the family they helped create, and they love seeing how the little ones have grown.

Other than that, it’s all up to you — and to a lesser extent, her — to decide.

We knew we wanted someone who would always stay a part of our lives, because it’s important to us that the kids understand where they came from.  So when we first met with Tiffany, we made sure she was on board with being a special aunt.

Other people don’t want an aunt, and they’d rather keep things as casual as possible afterwards.  There are plenty of surrogates who are looking for that arrangement, too.

One thing’s for sure.  The surrogate won’t have any visitation rights with the kids.  It’s entirely the parents’ prerogative how much contact you maintain with the surrogate after the birth.  Even our surrogate, whom we love like family, doesn’t have any legal rights to see our kids.

When we signed up with our surrogacy agency, we were told that 98% of couples pursuing gestational surrogacy had a baby within the first three in vitro attempts.  We were astounded by that figure, and I still think it may be slightly inflated.  But when you think about it, gestational surrogacy is bound to have a high success rate.

The surrogate is tested extensively before she’s matched with an intended parent couple.  In most cases, she’s already carried at least one baby of her own to term, if not several.  So her fertility is never in doubt.

The egg donor is also tested beforehand.  She’s young and healthy, and she may even have donated eggs for other couples in the past.

Plus, you have two potential sperm donors.  Even if one of the men is infertile, which is unlikely, then there’s a good chance the other can step in.

That goes for the women, too.  If your first in vitro fails, you can replace the surrogate and/or the egg donor for your next try.

In vitro can be an uphill battle for a straight couple who have already had trouble conceiving on their own.  But for two men, fertility is rarely a problem.

6.  You’re not as altruistic as you think you are.

Here’s the one I’m going to get some flack for.  Let me say that I think adoption is a beautiful way to make a family, one Drew and I considered ourselves, and which, in different circumstances, we would’ve been thrilled to pursue.

But occasionally the adoption advocates will imply that they’re better than us, that we’re selfish or greedy or that we’re letting parentless children suffer while we go off and make our designer fetuses.  Well, before those people get to you, let me tell you that they’re misguided at best.

The ones who are getting left out of all of this happiness are special needs kids.  They’re the ones stuck in the foster system, the ones most desperate for families to take them in.  No one ever tells straight couples that they should adopt a special needs kid rather than selfishly reproduce from their own genes, and the argument could just as easily apply to them.

Infertility isn’t a curse or a sign from God that you need to dedicate your life to helping sick children.  Not everyone is made for that, and that’s OK.

If you feel a calling to open your home to a special needs child, then I commend you, you are a saint, and I’ll admit it: you’re better than me.  But if you’re foregoing surrogacy so you can put yourself on a waiting list for a healthy Caucasian newborn from the Midwest, then I don’t think what we’re doing is all that different.

You’ve probably noticed that I left biology off my list.  Yes, if you conceive a child through surrogacy, then either you or your partner can donate the sperm.  You get to do that fun thing where you say, “Oh, look, she has my eyebrows!”  You might even be so lucky as to have your sister donate eggs, like we did, so your kids can be biologically related to you both.  (I need to state the following every time so people don’t get confused: I was the sperm donor.  Drew’s sister was the egg donor.  She and I are of no biological relation.  There was no test tube incest going on, nor would any reputable fertility doctor allow that.)

Ultimately, though, I don’t think the biological argument should sway you one way or the other, because the kid you have is your kid, regardless of how they came into your family.  You’re going to spend a lot more time diapering them, playing with them, teaching them, learning from them and loving them than you are pondering their genetics.

Let me reiterate that I’m not endorsing surrogacy or saying that it’s right for everyone, but these are a few of the reasons it worked for me and Drew.

Once you’re a parent, it won’t matter where your gayby came from, but getting there isn’t easy, and hopefully this helped someone along the way.