The way some parents try desperately to get their kids to eat broccoli or take their vitamins, I have routinely pressured my kids to eat their ice cream.  It’s a major staple of their Daddy’s diet, and one of the few things I can guarantee we’ll always have around the house.  Drew’s brother once busted me by counting 9 cartons in my freezer.  Until then, I’d never known I was more interested in ice cream than the average guy.

So far, the kids have fought me on it.  No matter what I tried – Coldstone, Ben & Jerry’s – they just weren’t biting.  Ice cream has some weird properties, like its frozen-ness or the way it melts when you touch it, that make it hard for two-year-olds to adapt to.  At least, I hope that’s the problem.  I don’t want to ponder the alternative: that maybe my kids just aren’t ice cream people.

Facing the possibility of remaining the only ice cream-eater in the family, I finally brought out the big guns… Dora the Explorer. 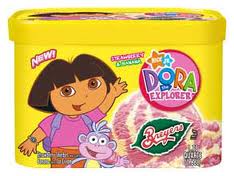 Ever since we watched Dora’s “Ice Cream” episode, ice cream is all my kids talk about.  Today, I told them we would have some after lunch.  They went bananas.

Then I got greedy.  I realized they were so into it that I could wave it over their heads as incentive.  “Let’s get in the high chairs.  If you make me chase you, we’re not having ice cream.”  “Finish your strawberries, or no ice cream!”  “Don’t throw any food on the floor, or we’re  not having ice cream!”

Bennett dutifully caved to each threat, but Sutton defied the last two.  She wouldn’t eat her strawberries, and when I insisted, she dumped the whole plate on the floor.

Never have the words “This hurts me more than it does you” rung truer.

It would’ve been much easier if she was an only child.  I could’ve distracted her with something else, and we both would’ve moved on.  But because Bennett had been so good, I had to give him ice cream, and that meant Sutton would have to focus on ice cream – and how she wasn’t eating it – the whole time he ate.

She screamed her head off for ten minutes.  “WANT ICE CREEEEEEEEAM!  WANT ICE CREEEEEAM RIGHT NOW!!!!”  I’ve never felt so cruel.  Personally, I would prefer being waterboarded to being denied ice cream.  But I laid out the rules very clearly, and for a moment, what mattered most was teaching my kid a lesson.

Bennett finished the half scoop I gave him, but he wasn’t crazy about it.  He had trouble getting it on his spoon, so he used his hands.  There was chocolate dripping everywhere, and his fingers were shaking as if they’d been frostbitten.  I don’t think his sister’s ranting and raving helped him enjoy his dessert either.

Once the ice cream was gone, Sutton calmed down.  I don’t think I’m going to make a big deal about us trying ice cream again for a while.

6 comments on “They All Scream For Ice Cream”