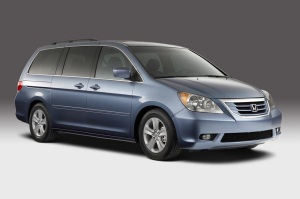 Primary caregivers of the world, unite!

OK, I’m not going to carry the “manifesto” thing that far, but it’s about time nature’s most maligned car got a little respect.  When the subject of minivans comes up, even among parents, it’s always a matter of shame and fear.  Ugh, minivans!  Here are some actual things that people have sort-of said to me, kind of:

“God, if I ever buy a minivan, please shoot me.”

Well, first of all, God doesn’t need to shoot you.  If he ever wants to kill you for buying the wrong kind of automobile, he’ll find a more interesting way to do it – probably by having you run over by a minivan.  In fact, that would be awesome.  Maybe I’d actually believe in God if he made such effective use of irony.  That’s how Sedaris won me over.

But let’s not talk religion.  I’m writing this post so I can come out of the closet.  I own a minivan, and I love it.  You hear me, world?  I LOVE MY MINIVAN!  And I don’t care who knows it.  Why do I love my minivan?  I’ll tell you why…

It’s nice.  When we were growing up, things were different.  Other than the Partridge Family, did you know anyone in the 70s or 80s whose family car wasn’t hideous and humiliating?  If your parents owned a station wagon, you have my sympathy.  No destination is so important to get to that it’s worth driving around in a wood-paneled weinermobile.  Station wagons should’ve been our punchbuggies, but when you saw one, it should’ve been a free pass to punch the driver.

Times have changed.  My minivan is roughly as opulent as Saddam’s palace – though I doubt his place had nearly as many cupholders.  Sucka!  The saleslady at the Honda dealership told me, “The Odyssey is like flying first class.”  Well, I say it’s better than that.  My Odyssey is so cool and futuristic, I call it my spaceship.  It’s the closest I’ll ever come to riding on Virgin Galactic, and you don’t have to be Lance Bass to score a seat in my ride.  Hop on in, lesser boyband members!  This is a motorcar for the masses.

It’s empowering.  I’m not a fan of the word “queer”, but I get why some gay people use it.  It’s a giant middle finger to the haters.  Well, I say we take back the minivan the way we took back “queer”.  My minivan lets people know instantly that I take the whole parenting thing seriously.  I’m not some clueless weekend dad fumbling around with his kids on the wife’s day off, putting their diapers on backwards and letting them tie plastic bags over their heads for fun.  I’m a professional, thank you very much.

You know what minivan drivers think of you when they see you squeezing your offspring into the backseat of a VW Passat?  We’re not saying to ourselves, “Wow, I really envy how they managed to hold onto their identity even after having kids.  Bravo for them!”  We’re thinking, “Hmph, amateurs!”  Seriously, parenthood is a lifestyle choice.  Commit or quit!

It’s built with parents in mind.  People always ask me how I can handle twins on my own all day while Drew’s at work.  Well, a big part of it is two little words: “automatic doors”.  It doesn’t matter that my arms are full of diaper bags, sippy cups, blankies, storybooks and the latest package to arrive from Diapers.com.  My car doors open and close with the push of a button.  And even if  my kids just stand there like doofuses while the doors are shutting, they won’t get crushed, because those suckers automatically retract, too.  There’s even a mirror above the rear-view mirror specifically for keeping an eye on back-seat shenanigans.  I’m the first one to say my kids are geniuses, but I’ll also admit that my car is smarter than all of us.  Speaking of which…

It’s good for the kids. The doorways are low so the kids can climb up easily.  The seats are fitted with car seat anchors to make attaching the restraints a little less frustrating.  And there’s plenty of space for all their junk, spare pacifiers, sweatshirts and copies of Yo Gabba Gabba books to read so they keep their yakking down while I’m driving.  It has a DVD player, too, but I haven’t had to resort to that yet.  Seriously, if the kids knew about that thing, they’d never leave the car.

And it’s queer as hell! 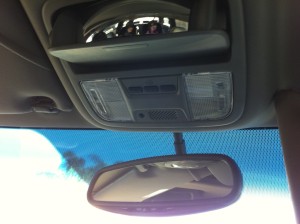 I see you behind me!

36 comments on “The Minivan Manifesto”