I had to go out of town for a few days, so my Mom is taking care of the kids while I’m gone.  I gave her a quick rundown of my daily responsibilities, but since I left I’ve been thinking of all the things I should’ve told her, the practical advice that would help any temporary caregiver survive a few hours or more in my shoes.

So I’ve decided to start a new blog feature, The Babysitter’s Guide to My Kids.  That way, I’ll have a handy guide for the next time I leave my kids in someone else’s care… and any of my regular readers will be qualified to step in at a moment’s notice.

First up, a guide to the main set for Why Jerry Why the sitcom, our condo building. 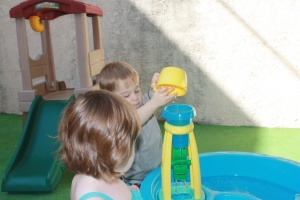 Amenities.  See that cement backlot covered in astroturf out our rear window?  That’s where the building’s Jacuzzi used to be before homeless people started using it as a bathtub.  Now, nobody uses it for anything.  If it’s nice out, the kids can play down there.  We’ve even set up a plastic slide and a big water toy that the kids love.  None of our neighbors has complained yet about us squatting in the common area this way.  If you are out there playing and one of them complains, just act like you don’t understand their thick Russian accent.  If they don’t have a thick Russian accent, then pretend like you have one and they’ll go away.

Elevator.  The kids love to push the elevator buttons, especially the “Emergency Only” button.  You will tell them not to do this, but sometimes they’ll get away with it anyway.  They may even team up.  One will distract you while the other pushes the button.  In this case, wait for the emergency operator to pick up, then let her know that Bennett or Sutton hit the button.  You can use their names.  I’m pretty sure they know our kids by now.

Our “backyard”.  On days when it’s too cold or rainy to go outside, we use the hallway like a backyard.  The kids can take their bikes, basketball hoop, shopping cart or whatever else they want and play there.  They love this.

Neighbors.  Our neighbors are all very friendly, and they love our kids.  They are mostly older people who enjoy the carefree sounds of youth.  In fact, when they hear the kids playing in the hall, they’ll often come out of their units to say hello.

The most enthusiastic is Auntie Ruthie.  She likes to poke her head out and feed the kids cookies.  I’m not crazy about them eating cookies between meals, but for Auntie Ruthie, I make an exception, because it makes her happy.  Sometimes the kids will knock on her door and ask for cookies.  If that happens, please make sure the kids stay and talk to Auntie Ruthie for a minute and not just run away once they score the goods.  If they’re going to eat junk food, they at least have to earn it by talking to a nice older lady for a few minutes.

I don’t recommend taking the kids in the hall until after the View is over.  That’s when Auntie Ruthie takes her morning shower.  Before then, you run the risk of seeing Auntie Ruthie in her house dress.

You may also run into Uncle Ivan.  Don’t let Uncle Ivan see the kids with cookies or he’ll get very judgmental about it.  He’ll sometimes give them weird fruits from the Russian market.

Last week, Uncle Ivan asked the kids if they knew their letters.  Again, I was feeling judged, but thankfully, they not only knew what the letters were but what sounds each one makes.  Sometimes, they could even name a word that started with the letter.

I thought Uncle Ivan would be impressed, but instead he shook his head and warned me that they were learning too fast.  He feared that when they got to school they would be bored and probably fail out.

Deliveries.  Approximately 2-14 times a day, we will get some kind of delivery.  Diapers, bulk boxes of baby food, video games from Amazon for Daddy.  To buzz someone in, pick up the phone and press 9.

Note that this system is also helpful if you happen to get locked out of the building.  Just use the intercom in the lobby to call a neighbor.  It doesn’t matter which one.  When they pick up, say the secret code: “UPS delivery!”.  They’ll buzz you in right away.  (Note: After 7PM, the secret code is “Chinese food!”)

Mini Mart.  If you run out of milk or something essential, you may be tempted to use the convenience store next door to our building.  I don’t recommend it.  We’re pretty sure it’s a front for drug dealers and/or the mob.  If you actually check the expiration dates in the store’s refrigerators, you’re likely to find milks from when Charmed was still on the air.

Don’t talk to anyone who’s idling in their car outside the mini mart or pacing back and forth nervously as if they’re waiting for someone to show up.  They’re probably just waiting for the next milk delivery.

Do not use the alley that separates the mini mart from our building and especially do not use the entrance to our building off that alley.  Those areas are frequented by homeless people and spiders, respectively.

We really do have a wonderful building, and the kids love living here.

Whenever possible, though, you’ll probably just want to stay inside.

26 comments on “The Babysitter’s Guide to My Kids, Part One”