There’s a park two blocks from our condo in West Hollywood.  It’s not pretty like parks should be, it’s not very quiet and it’s not geared much toward kids.  The picnic tables are filled with old men smoking cigarettes and playing chess, and if you see a blanket spread out on the grass, it’s more likely a homeless person’s bed than a family’s picnic site.

But for a little over two years, it was our park.

When the kids were too young to walk, we pushed them up and down the park’s single pathway in the double stroller.  Heavyset Russian grandmas would see them and tap me on the shoulder.  They’d chatter in small groups for a moment until one of them came up with the word they were all searching for.

As the kids got bigger, we checked out some of the fun things the park had to offer.

Before they could crawl, we’d let them roll around on the grass, stooping over to pick cigarette butts out of their path.

We had two rules at the park.  Don’t eat anything you pick up off the ground, and stay away from the filthy water spout.  There was a third rule, which usually went unspoken, which was that we always stayed in the toddler area.

The toddler area is about the size of a post office waiting room, only dumpier, with one double slide and a single bobbing motorcycle thing which the kids never really enjoyed. This park predated the invention of that spongy rubber stuff they put on the ground at playgrounds these days.  Instead, it was full of wood chips.  Rigid, jagged, unsteady wood chips.  When the kids fell down, it hurt.  I remember when they were just learning to walk, they would tumble over every 2 or 3 steps, their hands plunging into piles of splintery wood.  But they never complained, never cried, never stopped getting back up and stumbling forward once more.

I never let the kids out of that tiny playground.  I feared that the taste of freedom would change them forever and I’d never again be able to keep them contained.  Without that fence, they’d be loose in a world I couldn’t control, full of cars zooming past, dogs running loose and the ever-constant threat of predators, that handful of jerks in the world who’ve ruined childhood for absolutely everyone.

The day before the movers came to take us to New York, Drew came home from work early.  We were tired and overwhelmed by what was looming, but we wanted to spend the time with the kids.

We took them to the park. 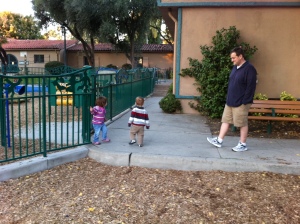 “Do you realize this is the last time we’ll ever take them here?” Drew observed.

Out of habit, the kids headed for the toddler area, but it seemed silly to put any restrictions on them today.  They’d grown up at this lousy park.  Why not let their last visit here be special?  I turned to Drew.  “Let’s just let them go.”

We told the kids they were free to explore.  I don’t think they believed us at first, then Bennett took off in a flash, as if he feared we might change our minds. 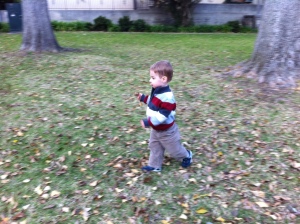 He ran around corners, pushed empty swings, pressed every water fountain button and dove down onto an open field, where he rolled around in the leaves, with an expression on his face that registered something far beyond mere happiness.

Sutton padded around more methodically.  She studied her surroundings and snooped on strangers.  She rode the big kids’ slide, holding onto the sides the whole way down, because maybe it was still a bit too big.

Every few minutes, she’d realize she’d lost track of her brother, and she’d call out, “Bennett, where aaaaaaaare you?”

I felt guilty that we hadn’t done this before.  I wished I could’ve let them run free every time we went to the park.  I wished our day would never have to end, that there might be some way to hold onto this last trip to the park forever.  But as it got dark, Drew and I called out our usual warning.  “Five more minutes!”  We needed to go home and have dinner.  It was going to be our last dinner in the condo.

“Who’s coming tomorrow?” we asked the exhausted little boy and girl scurrying alongside us down Santa Monica Boulevard.

“That’s right.  And where are we moving to?”

We’d been having this conversation a lot over the previous few weeks.  We’d trained them well about what to expect in the days to come – a new house, maybe a new park, definitely heavy coats that we’d have to wear every time we went outside.  Lots of exciting new things to look forward to.

And they understood.  I really believe they did.  Even a two-year-old knows how to look ahead – to nap time, to dessert, to a visit from Grandma.  Looking ahead is easy.

There’s one thing they could never comprehend, though, not at their age, because it’s something I still struggle with myself… and that’s what it means to leave something behind.