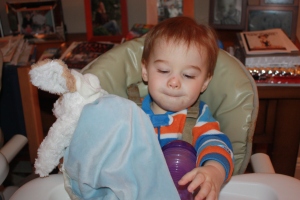 In our house, a dog blanket is a boy’s best friend.

When our kids were born, someone (thank you, whoever you were) bought them each security blankets.  They’re tiny, soft squares of fabric with plush heads growing inexplicably out of one corner.  They’re freaks of babydom, neither stuffed animal nor legitimate bedding, but when our kids need some comfort, they’re the next best thing to Daddy.

Sutton’s is a rabbit, whom we creatively named Mrs. Bunny.  Bennett’s is a sailor dog whose hat says “Skip-It”.  So we called him “Mr. Skip-It”.  (Maybe this is why they’re not very creative with naming.)

Mrs. B and Mr. S are indispensable around our house.  They sleep with the kids, they ride in the car with them.  They would eat with them, too, but we got tired of having to sponge out the pureed carrot stains, so now during meals, the blankets sit in the “VIP section” (Very Important Pets), where they can watch Bennett & Sutton eat from well outside splashing range.

There’s something our kids don’t know, though… a wicked secret Drew and I have kept from them:

Their special blankets aren’t quite as special as they think.

We were worried what might happen if either Mrs. Bunny or Mr. Skip-It ever got lost, so we bought a few extras.  We keep them tucked away in a high drawer the kids can’t reach.

I know where you think this is headed, but when we’ve occasionally swapped in the new ones, the kids didn’t notice any difference, even though they were bright, stain-free and actually smelled like fresh linen rather than messy kid.

Now that our little blanket lovers are a little older, they’re not quite as attached as they used to be.  They’ll drop their beloved blankets around the house, lose them in the couch cushions or under their cribs.  When they want them, though, they still really want them, which means we end up searching everywhere to track them down.

One day last week at bedtime, Mr. Skip-It was M.I.A.  It was getting late and the kids were cranky, so finally, we distracted Bennett and pulled out a backup.  Drew tore our tiny house apart for an hour that night looking for the original, to no avail.  He finally gave up.

The next afternoon, while the kids were playing, I was in the kitchen when I heard Bennett shout, “Two Mr. Skip-Its!”  I ran into the living room, and sure enough, the jig was up. 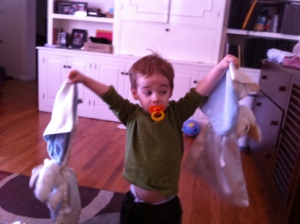 I was totally busted.  My innocent little boy knew the dark truth: his daddies had been fooling him.  His one-of-a-kind toy was as mass produced as an Alvin & the Chipmunks figurine from a Happy Meal.  I waited for him to lash out, to question what else was real, to have his first existential tantrum.

But incredibly, he just went back to playing.

“Wow, two Skip-Its,” I said, playing dumb.  “That’s pretty cool.”  At the first opportunity, I snuck one of them away and put it back in the drawer.  Whew!  Close call.

I thought it was the end of the story.

Late that night, Bennett woke up crying.  When he does this, it’s usually because he rolled away from Mr. Skip-It in his sleep and now he can’t find him in the dark.  So Drew went in to reunite them and get the boy back to sleep.

But this time, Bennett had Mr. Skip-It at his side, as usual.  Drew asked him what was wrong.

Bennett looked up at him and cried, “I want two Mr. Skip-Its!”

UPDATE: Drew has a better memory than I do.  He pointed out that Mr. Skip-It and Mrs. Bunny were the generous gifts of Doron Ofir, whom he used to work with in LA.  Doron’s prior claim to fame is having discovered the cast of “Jersey Shore”.  Snooki and Skip-It – a pretty solid track record, if you ask me.  Thanks, Doron!