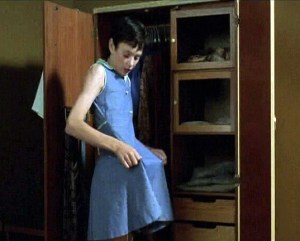 If you’re wondering whether gay parents are more likely to raise gay kids, you should know that my 2 1/2 year-old daughter has already announced that she wants to marry a boy when she grows up.  No particular boy, not at this point, just “a boy”.

Where did she get this crazy idea that you can marry, you know, people of the opposite sex?  I blame Disney movies.  Ariel and Eric, Tiana and Naveen, Beauty and the Beast.  Daddy and Daddy just can’t compete with love stories like those, especially without any Menken-penned showtunes of our own for her to dance along to.

I’ve even reminded her that girls can marry girls, at least here in New York.  No thanks, she’s marrying a boy.  And her brother is going to marry a girl.

Like most boys his age, Bennett hasn’t shown much interest yet in marrying anyone, of either gender.  But he does want to wear a dress.  Badly.  Lately, he’s been asking me every day.

I read absolutely nothing into this, of course.  It’s not like either of his dads was ever into the drag thing, but he certainly hears about dresses an awful lot.  His twin sister is obsessed with them and gets a lot of attention for them, so I don’t blame him for thinking something magical will happen if he puts one on.  He’d definitely get a lot of attention.

Of course, that’s my fear.  I don’t care if the kid wears a dress, whether or not it ends up being something he wants to do when he gets older.  But I know if he wears a dress to the playground or the zoo, some schmuck kid (or, perhaps more likely, grown-up) will feed him that nonsense that “boys don’t wear dresses”.

If that happens, it might not be a big deal.  He might go, “Oh, really?  They don’t?  Why didn’t you tell me that, Daddy?”  Then again, he might cry.  I’m just not ready for the world to teach my kid shame.  I grew up in the closet myself, albeit a slightly different one, and I don’t want that to happen to him.  For now, I don’t even want him to know there is a closet.

So when he asks me to wear a dress, I don’t say no.  I tell him he can do it “later” (as in when we’re not going outside for a while).

“Later” also means when he’s old enough to understand how other people might react.  And if he wants to wear dresses anyway, then I’ll have his back — plunging, ruffled or otherwise.

I’ll also remind him that he can marry whomever he wants, no matter what society – or his sister – might tell him.

67 comments on “My Son Wants To Wear a Dress”