My daughter was looking out the car window on a particularly sunny day last week.  “The sky is purple!” she announced.

The sky looked like it did on just about any other day.  Except for a few puffy white clouds, it was bright, brilliant and blue.  I vaguely remembered a few weeks earlier when I pointed out a picturesque sunset to the kids.  It was purple that day, kind of.  Why rock the boat?  “Yeah,” I said.  “The sky can be purple sometimes.  It could also be orange or gray or…”

“The sky is blue!” my son interrupted.  He shouted it, like a challenge, as if to shame me for humoring his sister.

“No!  The sky is purple!” she countered from the seat beside him.  “It’s purple!”

Now it was a debate.  Was the sky blue or purple?  The dad in me said that I shouldn’t take sides.  Respect both their viewpoints, claim the color of the sky is a matter of opinion or perspective.  “The sky is however you see it!”, I’d cheerfully declare, then try to change the subject.  Can’t we all just get along?  There was just one problem.

The sky is fucking blue.

Everyone knows it.  It’s not an opinion.  It’s a fact.  And not just any fact.  It’s the fact people cite when they want an example of something that’s unquestionably factual.  It’s the fact.  The sky is blue.  End of discussion.  If I said anything else, I’d feel like an idiot or a fraud.

“The sky is blue,” I announced.

She started to cry, but I refused to give in.  Whining doesn’t win you arguments in my minivan.

This little story pretty well sums up my feelings about the Chick-Fil-A controversy.

I’ve heard so many people claim they support the company as a matter of free speech.  It’s not about homophobia, they insist, as they proudly post pictures of their #2 combo to their Facebook, Twitter, Instagram or wherever else they can show it off to everyone they know.

There’s a voice in my head that says to just let it go.  Maybe that’s how they see it.  Let them say what they want.  I’m sure as Hell not going to eat there, but who cares what anyone else does?

The problem is… the sky is fucking blue, and people who flaunt their support of Chick-Fil-A in the face of this controversy are bigots, plain and simple.  It’s not my opinion, it’s a fact, and I’d be a fraud if I pretended otherwise.  This falls squarely under the Judge Judy rule of “Don’t pee on my leg and tell me it’s raining.”

You’re not waiting in line 20 minutes for waffle fries to make a point about free speech, or you’d be just as quick to defend the speech of someone you disagree with, like me.  You’re showing your “appreciation” for Chick-Fil-A because “I hate gay people” is so unpleasant to utter aloud.  It’s much easier to say, “I’m going to eat this chicken sandwich.”  Right now, appreciating Chick-Fil-A is the safest form of homophobia there is.  No wonder so many people are flocking to their restaurants.  And if anyone gets offended, you can plead innocent.  “What?  I don’t hate gay people.  I just like fill-in-the-blank [breast tenders, religious tolerance, the First Amendment].”

If that’s your argument, then at the very best you’re kidding yourself.  Let me make it perfectly clear, though, that you’re not fooling me. 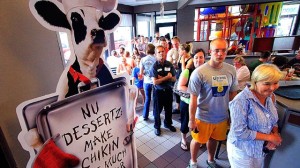 Chick-Fil-A has donated millions of dollars to anti-gay groups and has given every indication that they will continue to do so.  We’re not just talking about organizations that oppose gay marriage.  These are hate groups that claim that homosexuality can be cured, that being gay is linked to child molestation and that gay people shouldn’t be allowed to raise children.  You can imagine why this would be a particularly sensitive issue to me.

There are kooks out there — kooks with real influence and national platforms — who think my kids should be “liberated” from me and my partner.  You want to support the homophobia of people like Dan Cathy?  This is where it’s headed, so don’t expect me to sit back and make nice.

Yes, Dan Cathy is entitled to his opinions.  On that, we can agree.  He’s also entitled to make whatever donations he wants.  The one thing he isn’t entitled to is my patronage, and if he’s actively supporting and encouraging the people who are out to hurt me and my kids, he’s not going to get it.

I’m not saying that everyone who dines at Chick-Fil-A is a bigot or my mortal enemy.  It’s possible some people go there out of convenience or necessity.  Maybe it’s the only place at the mall food court their kids will eat or it’s the only drive-thru they pass on their way home every night.  It could be that they work there and rely on the employee discount.  I’m not going to judge everyone who patronizes the business.  Life’s complicated, and we all have our own reasons for doing the things we do.

But if you’re going to eat Chick-Fil-A to make some political point, at least have the courage to be honest about the point you’re making.

The sky is blue.

70 comments on “Chick-Fil-A Took My Baby Away”