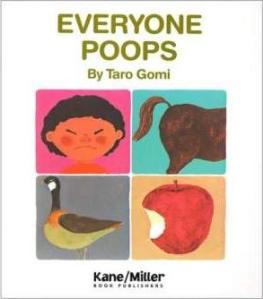 Sure, but not always where you want them to.

Nothing shocked me more about parenthood than how fast I became desensitized to my children’s feces.  Having twins meant dealing with poop about a squijillion times a day.  It wasn’t long before I could wipe their butts as cheerily as I could mix their formula or play peek-a-boo.  We’d be out at a restaurant when I’d smell one of their tiny dumps, and I’d just shrug it off.  I’ll change them when I get home, I figured, and then, while the scent crept in and out of my nostrils, I’d merrily shove another fistful of waffle fries through my yammer.

One day I found a not insignificant smear of poop on my shirt, hours after the last time I’d changed the kids.  We’d just come back from a long walk.  Oh well.  No biggie.  People probably thought it was chocolate.

I’m not saying I’m proud of any of this.  In fact, Pre-Parenthood Me would be rightly horrified by who I’ve become.  I always figured I’d potty train the kids as soon as they could crawl.  “There’s the bathroom, Buster.  It’s your problem now!”

Turns out, that’s not too realistic.

We bought the kids their first potty when they were 18 months old.  “That’s where you’re going to pee and poo!” we’d say, and we’d all scream our heads off from excitement.  “Hooray!!!”

“Where are you going to pee and poo?” we’d ask.

“Do you want to go there now?” 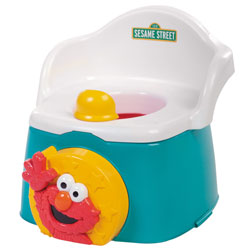 It was an Elmo potty, and after you used it, you could high-five Elmo and he’d say something like, “Way to go, dude!”  But you didn’t have to sit on the potty to get Elmo to talk.  He’d congratulate you either way.  For months, Elmo told my kids what an awesome job they were doing, when their bare butts had never once touched his pristine rim.

Not that I blame them for not using an Elmo potty.  We were asking them to do some pretty gross things to their hero.  Does Tom Cruise shit on the image of L. Ron Hubbard?  Well, who knows actually.  Scientologists are freaking nuts.

By the time my kids were two and a half, the Elmo potty was just another forgotten toy, something to step over on the way toward unrolling a full spool of toilet paper when Daddy wasn’t looking.  Nobody high-fived him anymore.  Nobody even thought about peeing or pooping on him.  We decided to reboot the entire potty training process.

For Round 2, they each got their own potty — a pink one for Sutton, a blue one for Bennett.  We put their names on them, because they could recognize their names now.  I gave them a bunch of stickers and let them each decorate their potty however they wanted.  It was a fun five-minute activity at a time when the kids needed something new to do every five minutes.

The excitement about the potties was back.

“What are you going to do in the potty?”

“Do you want to pee and poo there now?” 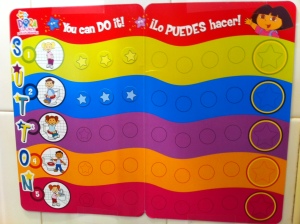 We decided to ramp up the incentives a bit.  We got sticker charts with Dora the Explorer on them.  Each chart had rows for five different activities — pulling down your own pants, sitting on the potty, peeing on the potty, flushing the pee down the toilet and washing your hands.  Poop, I guess, earned double stickers.  The point was moot.  The kids would check off the first two categories and be happy enough with those two stickers that they didn’t need the rest.

So we found a Big Prize.  We bought wall decals to put in their room — Dora for Sutton, Thomas the Train for Bennett.  They could have them as soon as they filled up the chart with stickers.

“Can I have the decals now?”

“No.”  They shrugged and walked away.

We added more incentive.  M&Ms!  (I know, using food as a bribe sends the wrong message, but hey, I was desperate.) 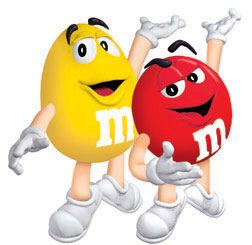 Finally, we had our first triumphs.  Any time I reminded Bennett about the M&Ms and dragged him to the toilet, he would sit there for a minute and squeeze out what he could.  “I’m done!” he’d say proudly.

Sutton wouldn’t even make an attempt.  If there was an incentive big enough to get her to go on the potty, we never found it.  And we tried.

“They’ll go when they’re ready,” people would assure us, so we didn’t pressure them too much.

“My kid came to me one day and told me she wanted to use the potty,” friends would say.  “Then we never looked back.”

By then, my kids had turned 3.  “Don’t worry,” people said.  “No one accepts their high school diploma wearing a diaper.”

I don’t know why my kids have been so resistant.  Maybe it’s harder to train them because they’re twins.  Maybe my kids are exceptionally stubborn.  Maybe I’m just bad at this.  I’m guessing it’s some combination of all three.

They start preschool this week, and they’re supposed to be trained when they get there.  So two weeks ago, I decided to go hard-core.  I’m a professional parent, I decided.  This is my job, and I take pride in it.  There’s no excuse for me not to get this done.

I found a website that promised to potty train kids in 3 days.  I was hoping it was a camp I could send them away to, but unfortunately, it was just an ebook written by some woman who claimed to be an expert on the subject.  I paypalled her $25 and downloaded her PDF.

I’m going to save you $25, because here’s her method in a nutshell:

By the end of the third day, she promised, all kids “get it”.

I followed her instructions.  I’d see my kids dancing around, trying to hold their bladders, and I’d remind them to go to the potty when they needed to.

I’d pick the kid up and now, instead of being concentrated in one puddle, their pee would leave a trail all the way through our house.

“That’s OK,” I’d say when we finally reached the bathroom and it was all done.  “Next time we just need to get there sooner.”  Then, I’d get down on my knees with a roll of paper towels and a bottle of Windex and spend 10 minutes cleaning while they went back to playing with their toys.  Inevitably, around minute 5, the other kid would have an accident, and now, I’d have to run them through the house, splashing through all the pee puddles from the last kid while making a second trail that I’d soon have to clean up.

This was not fun for any of us.

The kids would scream and cry whenever I picked them up.  They would refuse to sit on the potty, even if they were still peeing when we got to the bathroom.  They never “got it”.

Sutton actually liked getting wet, not because she enjoyed the feeling, but because it meant she got to change into another one of her outfits.  If she had enough accidents, she could go through her entire wardrobe in one day.  Potty training made my little girl into Cher. 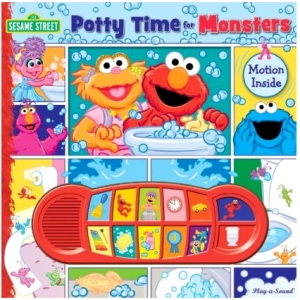 Still, the process was taking its toll.  The first night of potty training, Sutton woke up screaming and saying there were monsters in her room.  She’d never seen monsters before, never even had a nightmare.

We spent three days stuck inside, the kids constantly panicking that their bladders would fill up and spawn another sprint to the potty, me going through roll after roll of extra-strength Bounty.

I tried to remember another time when my kids were this miserable.  Then, it came to me: physical therapy.

Since they rolled over at three days old, Bennett and Sutton have been late on every physical milestone — sitting up, holding their own utensils, you name it.  When they weren’t crawling at almost a year old, our doctor sent us to physical therapy.

For an hour every week, I watched my happy little kids scream and wail at the positions the therapist would force them into.  They were miserable, and I swear they were pleading with me with their eyes, as if to say, “Why are you letting her do this, Daddy?”

The therapist taught me the exercises, so I could repeat them at home, every day.  I never did.  I didn’t care if they weren’t crawling.  They certainly didn’t care.  It was actually cuter to watch them roll around everywhere they wanted to go.  To change course, they’d roll up to a wall, use their feet to pivot them in a different direction, then push off where they wanted to go.  It was kind of genius, and they giggled merrily the whole time they did it.

It came down to a simple decision for me… what’s more important: do I want my kids to crawl, or do I want them to be happy?

We stopped going to physical therapy.

Eventually, they crawled without some scary lady posing them like Gumbys every week.  They even started walking… around 6 months later than other kids.  But they were happy, ridiculously so.  And so was I.

So on day 4 of our 3-day potty training course, I put diapers back on my kids and took them to an indoor playground.  They jumped on the trampoline, rode the mini cars, hung from the zip line, built giant block towers and laughed their silly little heads off.

Tomorrow, they’ll start preschool… in diapers.  I know I’ll probably get in trouble for not having them trained, but if the teacher gets snippy about it, I’m ready to defend myself.

And if they turn out to be the first kids ever who are still in diapers when they graduate high school, so be it.  They’re getting old enough that soon, they’ll be able to change themselves.  At that point, my job will be done.

“There’s where we keep the Pampers, Buster,” I’ll say.  “It’s your problem now!”

55 comments on “I Know Nothing About… Potty Training”