I never planned to put my kids on camera.  I mean, my cameras, sure.  I have about 10 bajillion hours of video of them doing completely mundane things like drooling or singing that new Taylor Swift song, which in my son’s interpretation, goes like this:

That’s it, over and over.  It never ends.  Never ever ever.

You can see why I keep these things to myself.

On the other hand, I feel a kind of parental duty to educate people about my family, to make the world a better, more understanding place for my kids, and of course, other kids in nontraditional families.

So when my friend Robin Sindler, who’s smart and talented and amazing and just happens to be a producer for The Today Show, came to me and asked if she could shoot a segment on our family, I thought about it for a bit and then said yes.

Then Drew said no.

Then, Robin said she would fly Susie down for an interview, meaning we’d get to spend a few days with her and her daughter, Grace.

We talked about it a lot, and eventually Drew agreed that if we were ever going to do something like this, we’d want to do it with someone we trust, on a show we respect, so our lives don’t get Jerry Springer-ized or used as a jumping-off point for some loudmouthed debate.

The Susie visit was a bonus, and of course, no story about my family would be complete unless it adequately praised Susie for her gift to us. 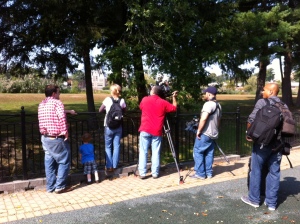 A few days later, Robin arrived with a small (and terrific) crew, and Drew and I slogged through what was probably our worst day of parenting ever.  We said things like, “Careful with Daddy’s mic pack!”  “Stay on the swing and keep smiling!”  And, “If you can just make it through one more bit of b-roll, we’ll have McDonald’s for lunch.”  We made the kids sit in the basement watching Beauty & The Beast while we shot our interview.  When Grace started crying, we asked Susie to take her for a walk so it wouldn’t ruin our audio.

We filmed at our swim class.  Usually, Drew’s at work for swim class, and I’m forced to sit with the other parents in a galley area so I don’t distract the kids.  For the camera crew, they let us sit at the edge of the pool, with our feet in the water.  The kids got to swim up to us and show us their moves, while a camera pushed in on their dripping wet faces.  They felt like movie stars.

It reminded me of all the reasons I never wanted our kids to be child actors.  “This is just for one day,” I kept reminding Drew.

I knew it had made an impression a couple of weeks later when we were reading one of my kids’ books.  (I think it was a Curious George book, but I can’t seem to find it now.)  There was a picture of a camera crew, including a woman who was standing in the back, taking notes on a small pad.  Sutton pointed at her and said, “That’s the producer!”

We had no idea how the piece would turn out or how many months would elapse before it would air.  It turned out it was only about three weeks.

I was terrified to watch it.  I didn’t want the kids to see it.  Drew had it on in his office, and he promised to call me afterward with his assessment. 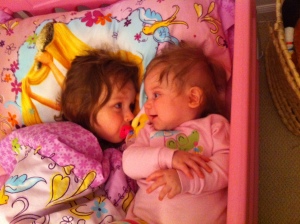 So we did.  I backed up my Tivo and sat with the kids on the couch.

They were most excited to see their cousin Grace.  “Oh, she’s so cute!” they squealed.  I think they’re so used to seeing videos of themselves that they didn’t see this as anything special.  When it was over, Sutton asked, “Now can we watch another show about us?”

I’ve heard from lots of people since this piece aired — friends who loved hearing the story for what was probably the millionth time, strangers who enjoyed hearing it for the first time.  Now that we’ve seen it, we have no regrets.

Hopefully you’ll enjoy it, too.  It may be the last time you see us on TV for a while.

Until I can figure out how to embed, you can click here to watch the segment.