Just over a year ago, my family was homeless. Okay, so it wasn’t in the sleeping-outdoors, panhandling-for-change sense of the word, but technically, we were without a place to live. We’d packed up our West Hollywood condo, and everything we owned was traveling through parts of the country we ourselves had mostly never seen.

Other than our decision to have kids, it was the biggest, scariest choice we’d ever made, but it seemed like the right thing to do for our family.

We spent the holidays with Drew’s parents and siblings in upstate New York, then I came down to meet the movers and start unpacking our stuff. Each item was tagged with a number, so it was easy to see exactly how much junk Drew and I had jointly amassed in our years on the West Coast. The highest number was roughly equal to my score on the SAT verbal section. (Granted, math was my forte.) Three days later, with only about 3 or 4 boxes unpacked, I opened the door to Drew and the kids, all of whom were seeing our new home for the first time.

It’s nice to ring in this year with some stability, because the last one started off so full of uncertainty. Would we like it here? Was this the right thing for the kids? Would we ever get unpacked?

I wish I could say I had definitive replies to those questions, but the only one I can answer for sure is the last one — no.

Earlier today, we sat down with the kids and looked through some pictures of our last days in California and our first days in New York. The differences kind of surprised us, as in this image of the moving truck: 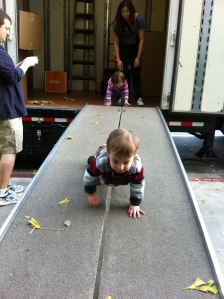 They’re crawling! That may not shock you as much as it does me, but in my memory, the last time my kids crawled was a hundred years ago. In actuality, it was just one year, or, according to the Mayan calendar, a mere 355 days followed by a timeless void.

It took me a minute before I could remember the moment. They knew how to walk by then, but the rickety ramp was a little too unsteady for then. Just to be safe, they got down on all fours. As we got ready to leave our past behind, the kids gave us one last glimpse of their infancy.

Confidence in walking ability wasn’t the only thing our family gained in 2012. We made some amazing new friends, reconnected with some old friends and spent wonderful times with our East Coast family (by which I mean our actual families, not the loose network of Bell Biv DeVoe-affiliated artists popular in the early 90s). The kids also made new friends, they learned about 10,000 new words (only 1 or 2 of which we’d prefer they hadn’t), caught a dozen or two kiddie viruses and started school.

Sometimes, I’m overwhelmed at how happy I am in our new home. Other times, I’ve overcome with grief at the lives and the friends we left behind. I’ll ask my kids if they remember someone from our old life, and they’ll just stare back at me blankly. Los Angeles is a blur to them, and soon, it’ll be nothing but a series of pictures their dads show them when they’re in the mood to look back and reflect.

Browsing through at the photos, I admit, I got a bit choked up. As for Drew, he sobbed uncontrollably and had to leave the room. So the big question facing us now, at the start of 2013, is pretty obvious: did we make the right choice?

I’ve asked myself that at least once on each of the last 365 days, and I sat down to write this post determined to address it. Once again, though, I’m not sure it has an answer. There’s no way of knowing what this last year would’ve been like if we hadn’t moved. All I know for sure is that none of these things would’ve happened: 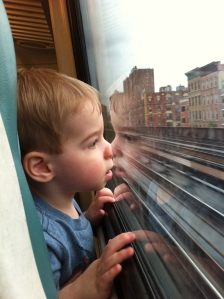 We would’ve made a completely different set of memories, some incredible, some undoubtedly sad. I wouldn’t have any of these pictures to treasure, but there would be a different set, one I probably would’ve loved just as much. And I’ll never know what they might’ve looked like.

That’s because changing the setting may change some things, but it doesn’t completely alter a story. Wherever we put ourselves, we’re headed forward on a similar trajectory through an uncertain future. Here or there, New York or LA, we’re still us. The same people and the same family.

We end one year tentatively crawling, and the next, it seems like we’ve been walking forever.