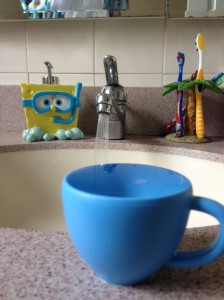 As I’m cleaning up after breakfast, I smell poop.

This is never a good thing.

I follow the scent to the bathroom. Poop is everywhere. In the potty, in the toilet, on Bennett’s bare butt, but also places poop shouldn’t be, like — well, everywhere else.

Usually, when Bennett has to poop, he first runs through the house shouting, “I need to POOOOOOOP!!!” This time, for whatever reason, he tried to do it all on his own.

And then, even worse, he tried to clean it up on his own.

I should mention that Bennett’s poops are roughly 1/2 the size of his body and this one is particularly — well, mushy.

He’s now standing on the stepstool trying to wash poop down the sink with a tiny plastic cup from a toy tea set. He fills it from the faucet, then dumps it on top of some brown part of the sink.

I start wiping his butt and legs. How does this little boy produce such an enormous mount of crap?

Sutton has been running around like a maniac, entertaining herself. She appears in the doorway. “You know who’s the jolliest man who visited our house?” she shouts.

Then she runs into a bedroom and closes the door.

29 comments on “My Poopiest Post Ever (You’ve Been Warned!)”