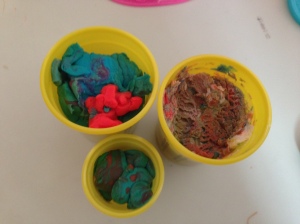 Like anybody’s kids, mine do things that drive me nuts, but most of the time, that’s exactly what they’re trying to do. They’re hoping that the 5,000th time they ask me for ice cream will be the one where I finally give in because I’m going to have a nervous breakdown if I have to keep saying no. The same goes for when they’re rubbing mashed potatoes in their hair at dinner or belting out “Girls Just Wanna Have Fun” when they’re supposed to be napping. Even at 3 1/2, they are virtuosos at pushing Daddy’s buttons.

Sometimes, though, they can fill me with unbridled rage without even trying. Kids can drive you nuts just by being kids, doing things that are perfectly developmentally appropriate, even beneficial for them.

What really frustrates me about these things is that I can’t punish the kids for them. All I can do is quietly seethe, ride the behavior out and then write blog posts in the hope that other parents out there might relate. Please, please tell me you do.

These are 5 of my Kid Peeves:

See all those cool things the kids on the box of the Play-Doh Fun Factory are making? The bright yellow bananas and pretty pink ribbons? Well, we can make those in my house for about two minutes. After that, my kids have mushed all the colors together into one messy swirl, which never looks like it’s supposed to when pressed into the molds or wrapped around the ball gown of the Spin and Style Cinderella.

I know, it’s their toy, and I shouldn’t tell them how to play with it. It’s probably good for them to experiment and make a mess with it. But eventually, they get frustrated that all their Play-Doh is the color of puke. “Daddy, where’s orange?” they’ll whimper.

“Where’s orange? Where’s orange?! It’s mushed in with green and purple and that glittery blue so it’s all just one turd-brown mess. Good luck making something out of that!”

Then I sigh and open another can of orange… which stays orange for about 5 seconds before being pressed into the turd with all the other colors.

No wonder our Play-Doh budget is killing us. 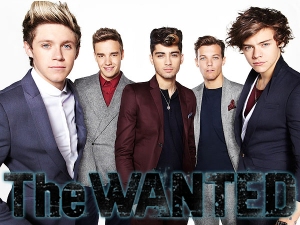 I thought my kids would be teenagers before they decided I was full of crap. But at three years old, they already doubt 90% of what comes out of my mouth, which is really frustrating because their other dad and I are their sources for roughly 100% of the information they seek. It burns the most when it’s something I’m clearly an expert on, like the alphabet (“I swear, kangaroo starts with ‘K’, not ‘C’!”) or One Direction songs.

“Daddy, who sings this song?”

3. Reading the same books over and over. 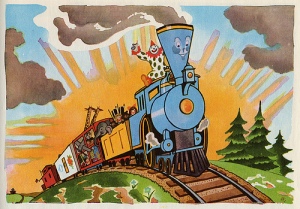 A few years ago, I read the book “The Curious Incident of the Dog in the Night-Time” by Mark Haddon, and it was so good that I read it a second time. Then, I moved on with my life. My kids do not understand this concept. We’ll get to the end of one of their favorite books, and they’ll instantly want to read it again. And again.

I know repetition is good for kids, and so are familiarity and routine. Plus, when you like something a lot, you don’t want it to end. But Daddy’s not getting quite as much enjoyment out of our 1,000th reading of “The Little Engine That Could.” We know he’s getting up the hill, dammit. Do we really need to read ten pages of “I think I can!”?

Sure, for the first few dozen times, I’m sharpening my dramatic reading of “The Very Hungry Caterpillar.” I’m rehearsing the best way to hit all the punchlines in “Don’t Let Pigeon Drive The Bus” and just where to pause for laughs. (Attention children’s theater companies: if you need someone to play the bus driver, I’ve got the part down cold.)

We don’t even bother to hold the book of “Goodnight Moon” anymore, because we all know it by heart. The pictures are permanently ingrained in our minds, like haunting memories of misspent youth or that chilling napalm photo from the Vietnam War.

Everyone’s heard the old saying, “It’s like riding a bicycle. You never forget.” Well, my kids could forget how to ride a bicycle. They forget everything. They forget how to put their coats on, how to get GoGurt out of the tube, how many daddies they have. They forget the dance moves we choreographed to that Ke$ha song, which we’ve practiced like A HUNDRED TIMES. When they’re counting to 20, they sometimes forget the number 17. Or 12. It varies.

They forget how knock-knock jokes are supposed to go. I can’t stand that the most childish form of humor has such a rigid structure that actual children can’t possibly get it right. “Say ‘Boo who?’!” I find myself shouting half the time. “C’mon, the joke only works if you say ‘Boo who?’! Say it!”

And speaking of humor…

5. Not laughing at my hilarious jokes.

Like a struggling stand-up, I’m all too used to my punchlines being met with blank stares and the sound of crickets. I bomb daily in front of my kids. Try as I might, I just can’t get them to appreciate my subtle comedy stylings.  Talk about a tough room. What sucks the most is that 90% of the time, they’re the only room I have.

Just about the only humor my kids appreciate right now are toot (i.e., “fart”) jokes and physical comedy. Sure, they love when daddy falls down. Only daddy wasn’t trying to be funny. He really fell, and he’s hurt. Stop laughing and get him an ice pack, you monsters!

Have your own kid peeves? I’d love to hear them in the comments section. And if you like mine, please share this post on Facebook, Twitter or whatever. (“whatever” btw is the name of a new social network. All the cool kids are on it.) It also makes me very happy when people like me on Facebook, so if you haven’t already, hey, won’t you please, because my kids would totally never do that for me.

117 comments on “Kid Peeves: 5 Perfectly Innocent Things My Toddlers Do That Drive Me F*%#in’ Nuts”