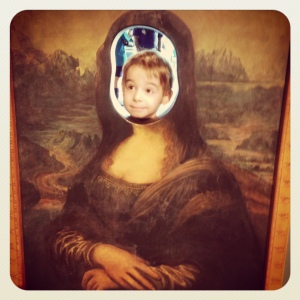 I had originally planned to call this post, “Shameless Boasts of a Superdad: My Kids Are Freaking Geniuses,” because any parent knows that their #1 responsibility in raising their children is to brag about them, even when privately the kids are driving them close to a nervous breakdown. Not my kids, of course. Other people’s. So I’ve heard.

My kids really are geniuses, and I was going to lay out all the evidence in this post so you could decide for yourself if I had a couple of Stephen Hawkings on my hands or merely Einsteins. I was going to lead the whole thing off with this picture: 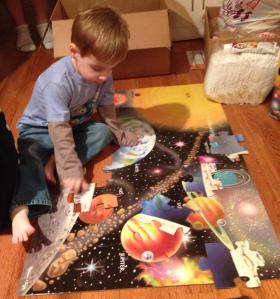 That’s Bennett completing a puzzle of the solar system, for the first time, by himself, without looking at the box. Um, yeah. And he was 3 years, 4 months old when this was taken. Did I mention he had no idea what the solar system even was? (He does now. He’s learned a lot in the last 4 months.)

As I started composing the post in my head, though, I had an “Uh-oh” moment. “Uh-oh,” I thought. “Some people might see this a little differently.”

See, a few months ago, I put up a post that showed Bennett doing one of his favorite activities, lining up whatever objects he has handy and imagining them as trains. I thought it showed a pretty creative mind, or at the very least, a snapshot of a little boy who really liked trains.

Most people did see it that way, but there was a minority that wrote with concern. It turns out a nagging attention to detail and repetitive behavior can be red flags in kids this age.

It wasn’t the first time I’d had those fears myself. Who doesn’t? We all know there’s an epidemic, and early intervention is key, so any half-aware parent is going to take note of their kid’s unusual behavior.

The problem is, everything about my kid is unusual. 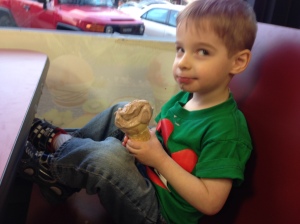 When Bennett was a baby, he started doing this thing where he would roll his eyes back in his head. It could’ve been a neurological tic, but I swear it seemed more like a sarcastic eye-roll. His timing with deploying it was impeccable. It really seemed like he was mocking me, which I loved. But he was way too young for that… wasn’t he?

Bennett also has a very mechanical mind. He loves toys that turn when you move a crank. He loves to check out all their moving parts. One day, Drew was running on the treadmill, and Bennett got down on the floor to inspect it. “It goes around!” he said, in a eureka moment. “You’re not moving!” At 3, he understands that a constantly rotating belt is what makes a treadmill work. Personally, if you’d asked me, my first guess would’ve been “magic”.

Bennett also likes to wear his sister’s dresses. He was planning to be Thomas the Train for Halloween, but at the last minute, he changed his mind and went as Sleeping Beauty. He’s told me that when he grows up, he plans to marry a boy. Other times, he says he’s going to marry his sister or one of his daddies. (And yes, it stings when he picks the other daddy over me. “Why, Bennett? Don’t you think I can provide for you?”) On a side note, it’s nice living at a time and in a state where my son can tell me he wants to marry a boy someday, and I can respond with a simple, “Okay!”

Again, some people want to put labels on these behaviors, but he’s 3 years old. Do I think he’s confused about his gender? Probably not. He’s always been very clear in labeling himself a boy. I just think in a family with two dads, you have to work extra hard to be subversive. Maybe he senses our family is different than most, and he wears it as a badge of honor. Plus, dresses are fun to twirl around in. 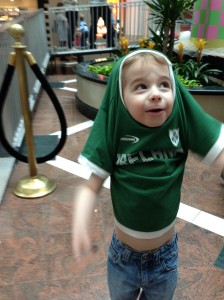 Bennett’s laugh is the single greatest sound in the world, a high-pitched titter that conveys nothing but pure joy. There’s a smile that goes with it that I won’t even try to describe. You just have to see it, and if you spend five seconds with him, you will. His favorite meal is a grilled cheese sandwich, followed closely by two peanut butter half-sandwiches. His third favorite meal is walking away from the table to play with his trains.

His other catch phrase is, “I gotta tell you something.” He says this every single time he begins a conversation, even if he’s not sure what he wants to talk about yet.

“I gotta tell you something.”

Speaking of trains, he knows every single friend Thomas the Tank Engine has. All their smushy faces look exactly the same to me, but one quick glance is all he needs to say, “That’s Gordon” or “That’s Skarloey”. He can play trains quietly by himself for half an hour. That may not sound like long, but at this age, it’s an ETERNITY. He can get 7 different engines going at once on the same track. He spaces them out perfectly so they won’t crash into each other. When we got him a kiddie mp3 player, he wanted us to load it up with nothing but Thomas the Tank Engine songs. (There are more than you’d imagine, and some of them aren’t half bad.)

He’s a better athlete than I ever was. A better dancer, too. He loves to invent games with names like “Run With a Balloon” or “Run Around the Trampoline,” or my favorite, which is simply called “Run!” 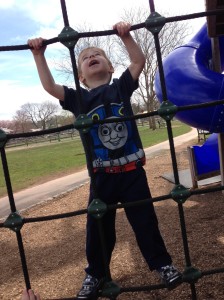 He’s off-the-charts skinny, literally below the first percentile in weight. He’s the only kid I’ve ever known who’ll stop eating dessert when he feels he’s had enough. Seriously, the kid can take two nibbles of an Oreo, shrug and say, “I’m done” and then just walk away. (That’s when his sister and I rush in and fight over the part he left behind.)

One of his favorite pastimes is to walk around with his eyes closed. At first we warned him he was going to get hurt, but then we realized stumbling into things was part of the fun for him. Maybe he just likes experimenting, seeing the world in a different way. He has gotten hurt, of course, but right after that, he’ll close his eyes and stumble into something else.

There are a million things about this kid that some people might see as odd, but whenever that voice in my head says, “Something’s wrong,” it gets shouted down by an even louder voice that tells me, “He’s perfect.” Not one of those million unique things about my kid is bad. So he’s good at math? Great. He has a silly sense of humor? Awesome. He likes machines? Swell.

What matters more to me than anything is that Bennett is the happiest kid I’ve ever known. One of the things he says the most is, “This is the best ____ ever!” You can insert virtually any word into that blank. “day,” “episode of ‘Dora’,” “peanut butter sandwich.” I’ve heard them all.

Quirkiness is a gift. So many people struggle to develop it in their teens and 20s, and my kid was lucky enough to born with it, in spades. Maybe it was growing up gay that made me realize not every idiosyncrasy is a problem to be solved. As a teenager, I always felt the need to hide from who I was. It took me half a lifetime to accept that there was nothing wrong with me. When it comes to my kids, I want to teach them that from the very start.

Sometimes, things Bennett does stand out to me, or to other people. But I’m not concerned. If there’s a technical term for whatever’s made him the way it is, it still won’t bother me, because what he is, is perfect.

My son is special, and I wouldn’t change a thing about him.

50 comments on “My Son is Special”