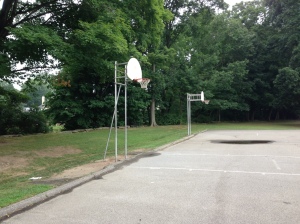 For the tiniest sliver of my childhood, I was a jock. Or at least I tried. I guess I was probably about 8 years old. It’s hard to recall, because I’ve resigned the memory to the deepest, darkest, most hidden corner of my brain. My mental panic room.

For reasons that must’ve made sense to me at the time, I decided I should try soccer. I guess I had seen other kids doing it, so it seemed like the normal thing to do. I took a break from staging the musical “Annie” in my backyard and suited up for a pee wee league. Here’s where the memory gets fuzzy again, because all that comes to mind when I try to think about soccer are these two things:

One, I was never allowed to take the field during a game. (And let me wish a belated eff you to that coach, while I’m at it.)

Two, there was a cooler at the sidelines that had orange slices in it.

Those are the only things I remember, because that alone was enough to make me swear off sports forever. Even their snacks sucked. What was the point? Those few weeks of soccer and a bit of bowling comprise the entirety of my athletic career.

Our new house is three doors down from a playground. My kids and I were on the jungle gym playing some imagination game they made up that merges elements of “Charlie and the Chocolate Factory” with Barbie’s “Princess & The Popstar”, when they noticed that the basketball court was empty, and that would make a perfect chocolate river-slash-ampitheater for the performance of our smash encore-slash-dessert.

So we headed over, and I prepared to play my least favorite playground game, “Everybody Keep Away From the Broken Glass!”, when the kids noticed that someone had left their basketball behind.

It’s a sign of how little sports is a part of our family that this is how my children ask me to shoot a basket. (Again, it was a basketball, not a soccer ball, though what the ball looks like is pretty much my extent of knowledge about the sport.) I figured I had nothing to lose, though. Thankfully, their respect for me has never been built around my athletic prowess. They’re perfectly impressed that I know how to find the Broadway channel on Sirius and that I can score enough to be labeled a “Hopeful” on our Playstation karaoke game.

So I picked up the “soccer ball”, dribbled a few times, studied the angle, moved over two steps, then shuffled back one step, took a deep breath and tossed ball skyward.

And an incredible thing happened. For one of the only times ever, I made a basket. Not just a regular basket, but a perfect, through-the-middle swish boom-goes-the-dynamite on-the-first-try two-pointer.

It started off as a squeal of delight and astonishment, transformed into cheers and applause and ended with a chant of “Daddy’s so cool! Daddy’s so cool!” that went on for over a minute.

And I just stood there and basked in it. It was the most beautiful feeling in the world.

I know a lot of kids dream of being Michael Jordan when they grow up, but I never even kidded myself that that was a possibility. And somehow, yesterday, for a moment, I was him, at least in the eyes of two three-year-olds who know nothing about sports and have yet to catch on that their Daddy is as clueless as they are.

Let’s just hope they never expect me to do that again.