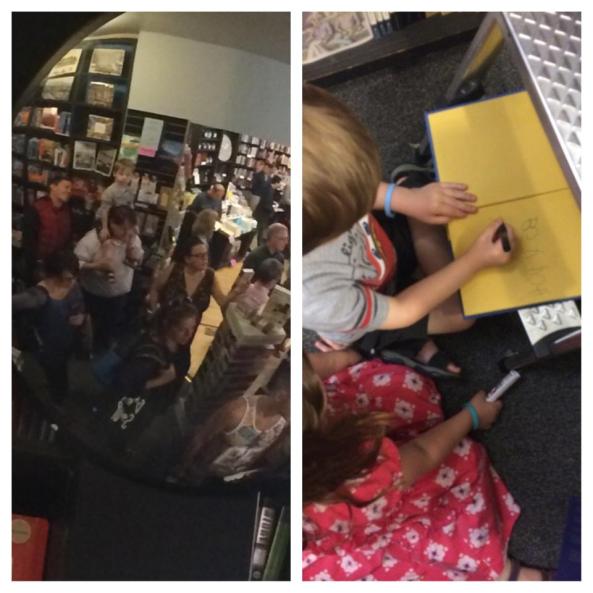 If you’ve ever lived in, visited or heard about Los Angeles, surely you know about the traffic. It’s horrible. Unspeakable. Practically unwriteable, but I’ll try anyway. Los Angeles traffic is especially bad on weeknights around 7pm, when everyone finally gets out of work in order to crawl home in their fuel-efficient vehicles on the freeway. The only thing worse than the traffic in Los Angeles is the parking, which is just never good, ever. Oh, God, the parking. I cringe just typing about it.

You know what’s great about LA, though? The people. I know, they sometimes get a bad rap, but I’m here to tell you that they’re solid, through and through. Among the many reasons I love Angelenos is that they’re willing to brave the traffic and the parking to support a friend.

My reading last Monday night was, simply put, one of the best nights of my life.

It started when I saw this behind the store: 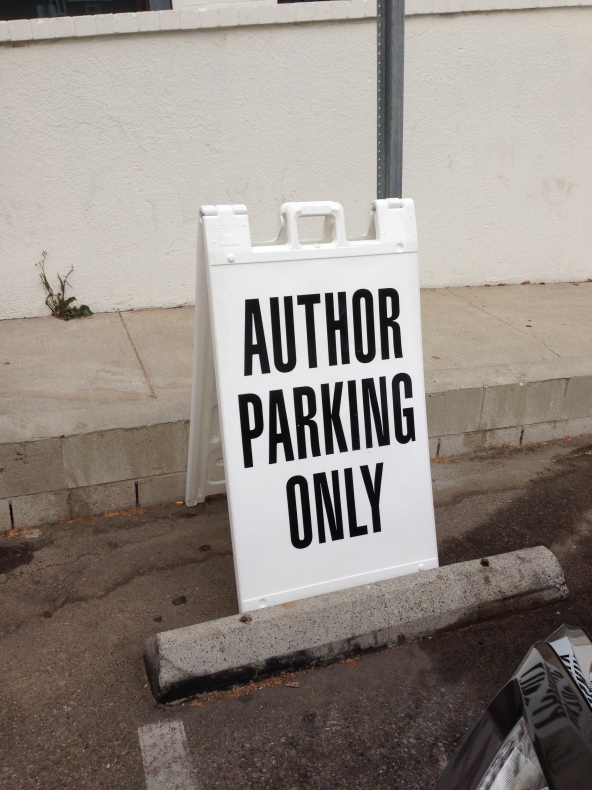 An assigned spot in Los Angeles? I’ve never felt like such a big shot.

And then there was this, from the store’s flyer for June: 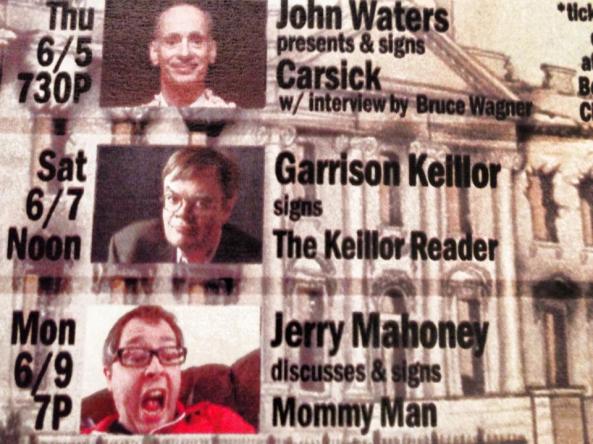 My friend Jessica complimented me on managing to look crazier than John Waters. Oh yes, I’m talking about the Jessica who you may have read about in “Mommy Man“. THE ONE WHO TALKS LIKE THIS! She was there, and so were some of the other very special people I wrote about in the book.

If you don’t know Book Soup, let me tell you a little about it. It’s an old school bookstore, full of books that rise up from the floor and stretch to the ceiling, everywhere you turn. It’s the kind of store where you might sometimes have trouble finding just what you’re looking for, but you’ll always enjoy the search, and along the way, you’ll find a dozen things you didn’t even know you wanted that look just as great. It’s a browser’s bookstore, and it’s in probably the best spot in West Hollywood, right on Sunset Boulevard, very close to where many of your favorite celebrities have been arrested.

They have fantastic taste in books, and even better taste in the events they choose to host, as you can see from at least 2/3 of the flyer above.

I first heard about Book Soup in the mid-90s when I arrived in LA as a starry-eyed kid. I was interning for Scott Rudin, and it seems like almost every day, someone would yell at me to go to Book Soup and pick up a book. I only dreamed that someday, some starry-eyed kid might get yelled at to go there and buy my book.

I just hope that kid didn’t show up last Tuesday, because then, BOOK SOUP WAS SOLD OUT OF “MOMMY MAN.”

There were about ten folding chairs set up when I arrived, and they filled up well before the 7pm starting time. People spilled out into every corner and crevice of a very crevice-y store. Close friends. People I hadn’t seen in years. People I’d never met before. So many people showed up, it was almost 7:20 before I finally began to read. Drew was so astonished, he made a list of everyone who showed, and he counted almost a hundred people.

They bought up every copy of my book and waited ridiculous amounts of time to get me to sign it. Those who couldn’t wait got the next best thing: autographs from my kids. 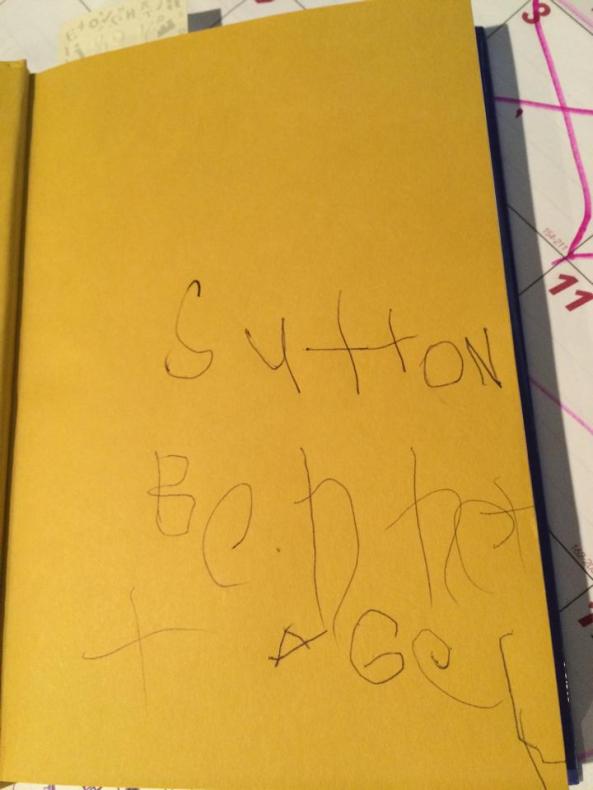 I never know what to write when signing books, but Bennett made it look easy: “Bennett, Age 4”

Yes, after a lot of debate, Drew and I decided to bring the kids, mostly because they really, really wanted to come. They’ve been to Drew’s office many times. It was nice to get a chance to show them what this Daddy does, when he’s not shuttling them back and forth to gymnastics class, at least. And it was one heck of an introduction for them. As you can imagine, they were treated like quite the little celebrities.

They had a great time. They sat in the front row, smiling the whole time, and they were delightfully obsessed over by everyone in attendance. (Thankfully, the reading itself, which I slightly censored in their presence, went well over their heads.) 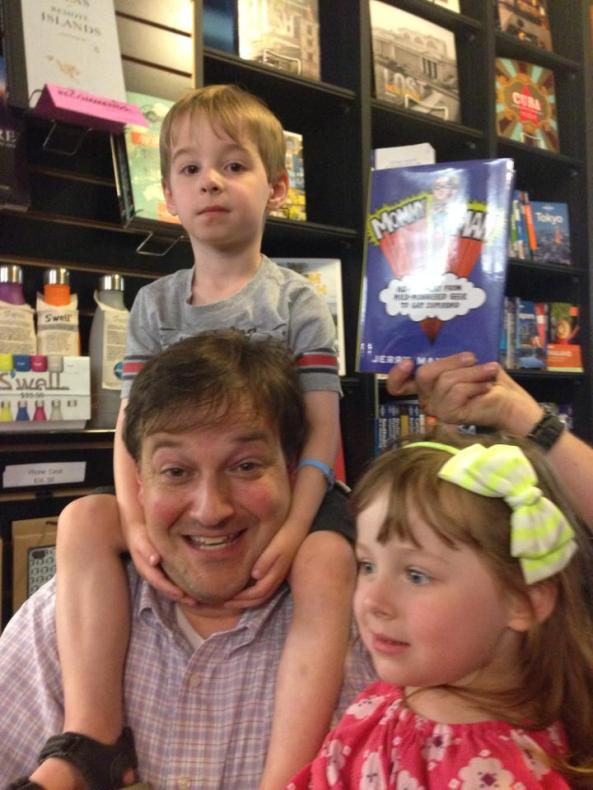 To say the crowd was supportive would be an understatement. They laughed in all the right places and none of the wrong places. They asked great questions and made me feel like Garrison Keillor for a night. (I hesitate to add this, but — aw, screw humility — the store staff told me my turnout was actually even better than Keillor’s.) 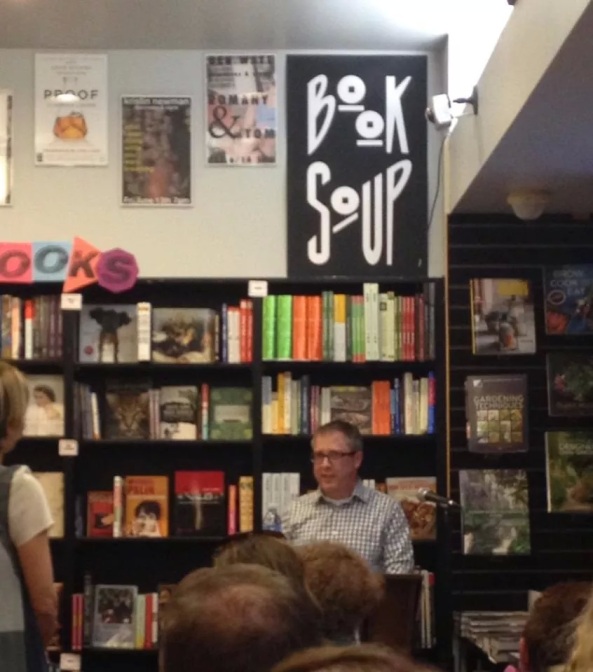 One of my big regrets of the evening is that I didn’t get a picture of Jessica, who seems to be many people’s favorite “character” in the book, but I offer you this instead. It’s Karyn, the amazing nurse I wrote about in the book. She gave us the tear-jerkingly sweet card on page 268, which I reprinted verbatim, so in a way you could say she was my co-writer. (Her real name, which I don’t think she’d mind me sharing, is Katye, and if you ever have a baby, you’d be very lucky to land Katye as your nurse.)

Katye freed up her busy work schedule and drove up to LA from Orange County (which at that time of day takes roughly 100 hours) with some of the other nurses from the hospital where the kids were born. It was truly special to get to see her again and have her reunited with my kids. I was so happy they got to meet her, because she was such a special part of our story and a big chunk of the reason I was in Book Soup in the first place. 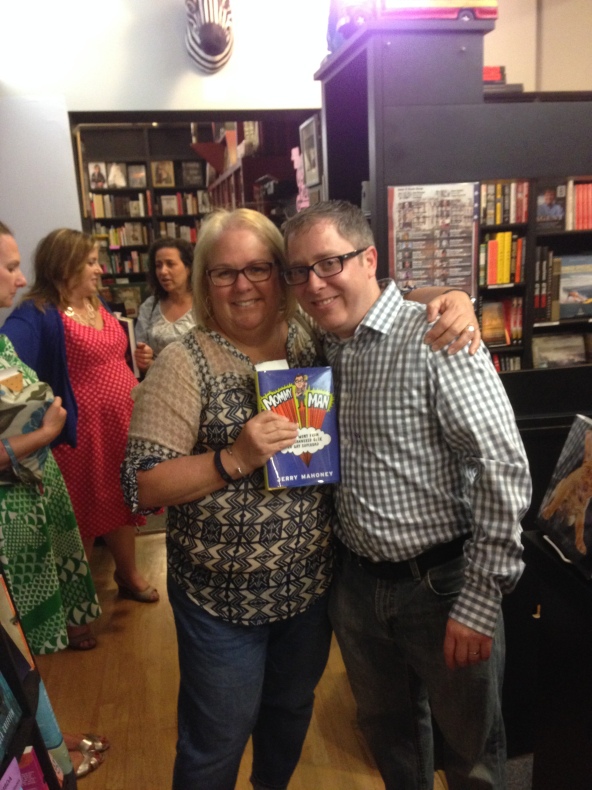 There were plenty of gay dads in attendance, including ones Drew and I knew before we became dads (like Jon and Harvey, who proved to us you can get away with having your kids call you both “Dad”) and ones who became dads after us, including Todd and Chris, who brought their gorgeous four-month-old daughter with them in a Baby Bjorn. One guest told me he and his husband were just starting their surrogacy journey, and he asked me to sign his book for their future surrogate.

Afterward, those who could stay came out to a bar across the street, which was the perfect way for me to hang onto this magical experience into the night.

If you’re in New York, I have good news for you. We’re doing it all again — tonight! That’s right, Monday, June 16, 2014 at 7pm at the Barnes and Noble on the Upper West Side of Manhattan (2289 Broadway, at 82nd Street). You can expect even more special guests this time, including Susie herself and my friend Greg, who will be very grateful that I’m not reading the sections about him. Plus Drew, of course. Come for the reading, then hang out with us afterward at a nearby location that serves alcohol (TBD).

For those of you in Westchester County, NY, you’ll get your chance on Thursday, June 19, 2014 at 6:30pm at Anderson’s Book Shop in Larchmont, NY.

And if you’re reading this from one of those bookstores, prepare yourself for a big night, because if there’s one thing I’ve learned since moving to New York, it’s that the people here are pretty incredible, too.

Last Monday’s reading was one of those highly infrequent moments as a writer when it all feels worthwhile, where you can see your words in action and interact with the people who are taking them in. One of the many good friends who was there that night was my old buddy Nick. He was the last one left at the end of the night as the bar was closing down, and he also happens to be one of the best writers I know. If there’s ever something I’m trying to say with my writing, I can bet Nick has said it better somewhere himself. So I’m going to let him say this for me, too. This morning, he tweeted this picture with the caption, “Sometimes, rarely, writing feels like this.” 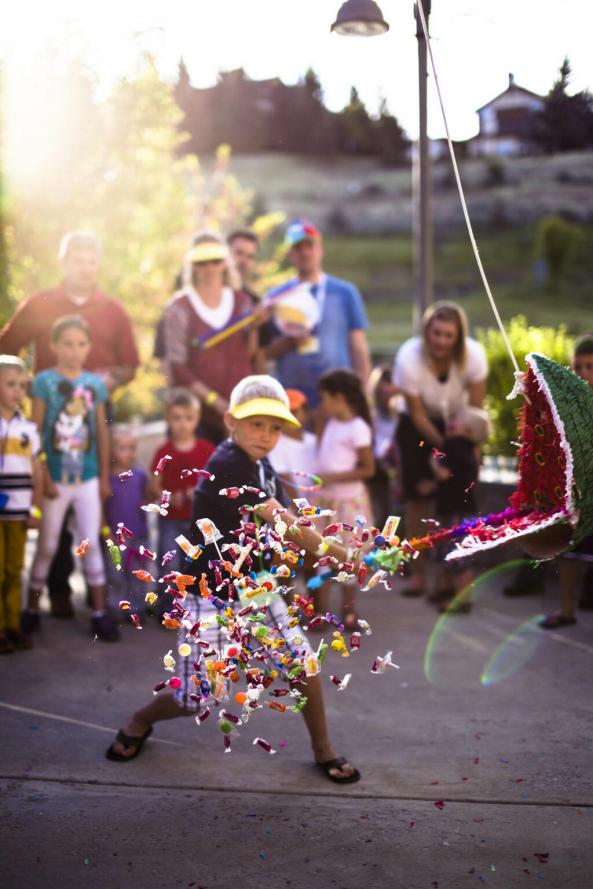 For me, last Monday was one of those nights.

Can’t make it to my NY readings? Well, here’s the next best thing. Order a copy of my book, scribble “Bennett, Age 4” in the front and create your own good time by reading it out loud at home. Don’t take my word for it. A complete stranger on GoodReads wrote, “I loved this book. It was really fabulous, incredibly funny in some places, incredibly heart-warming in other places… I would recommend this book to anyone who loves a good laugh and enjoys a great, quick read.” So take her word for it, and pick up your own copy in hardcover or e-version!