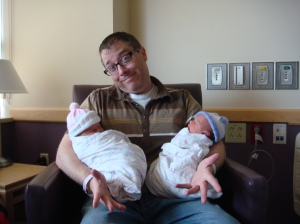 I have a guest post up today on the site 12 Most.  It’s about the most common false impressions people have about raising twins.  Most of all, people give me far too much credit.  Check it out!

One of the dumbest decisions I ever made was to play the trombone, in fourth grade.  I was a short kid, and the instrument’s case was as big as I was.  On band days, I would carry my bookbag to school in one hand, the trombone in the other.  I would make it about twenty feet along the sidewalks of my suburb, then I’d have to stop, take a break and switch hands.  I did this all the way to school.  Almost two miles, each way. I didn’t know it at the time, but that was the perfect preparation for raising twins.

There have been many times over the last two years I’ve thought back to that determined little boy on his way to band practice to summon some strength I wasn’t sure I had.

In fifth grade, I switched to the trumpet, which was a bit lighter and less cumbersome.  And that’s about where I am now.  Still making that endless trek to school, but with a bit of a lighter load.

Raising twins is all about adapting, to their needs and to each stage they go through.  Reading this post from MamaDeuce, I realized how much things have changed since they were younger.  Things really do go much smoother now.

So here’s a look at what my life was like back then, when my kids were 6 months old and now, when they’re 2.

THEN: I insisted on feeding my kids simultaneously.  Otherwise, by the time one finished, it’d already be time to feed the next one, and I’d never get a break.  This was back when the kids couldn’t even sit up on their own, so I had to prop them against a Boppy.  It was not easy, but eventually, I perfected the one-handed double-feed technique.

NOW: I prep their food, and then they feed themselves.  That gives me 20 minutes or so when I can wash dishes, write blog posts or just hang out with them.  When I don’t feel like “cooking” (i.e., cutting up strawberries and pulling the tops off yogurt cups), I order pizza.  On those nights, we have a pizza party, where I sit and eat with them and we talk about our day.  Pizza parties are my favorite.

THEN:  It’s impossible to keep two squirmy babies within emergency distance of you at all times, so I cheated.  I built Boppy barricades in the living room (just like MamaDeuce) to keep them penned in.  Boppies, of course, are intended for breastfeeding, but dads, I assure you you’ll find practical uses for them, too.

NOW:  There’s no barricade that can hold those two tiny steamrollers these days, but thankfully, I don’t need to watch them quite as closely.  Sometimes they’ll both play on their own quietly in the next room.  But if it gets too quiet, it’s time to check on them, pronto.

THEN: Parks are the scariest place to take young twins alone, because we all know that’s where the pervs are.  There are also streets kids can run into, dogs that can bite, jungle gyms they can fall off and a million other dangers kids don’t recognize because they’re so excited to be at a place where you let them go totally ape-poopy.  When my kids were younger, we only went to one park, which had a fenced-in toddler playground that was about twenty feet by twenty feet.  That was about as much freedom as the three of us collectively could handle.

NOW:  We go to a slightly larger park, but this one’s fenced, too.  When Bennett and Sutton go in different directions, I stand in the middle and keep one eye on each of them, then dart into action if somebody’s about to get clocked by a swing.  We have strict rules about never leaving the playground when some yahoo parent leaves the gate open… because, let’s face it, parents of singletons just don’t get it.

THEN: At six months old, their attention span, at its best, was about 30 seconds.  That’s how long they could listen to a book or play with a toy before they’d get distracted or cranky.  That meant that every day, I was programming roughly 1,200 activities.  Or at least it felt that way.  Thankfully, they napped a lot.

The exception, at both 6 months and 2 years, has been TV.  I know the experts say it causes ADD, but so far, it’s only had the opposite effect.  My kids can maintain interest in TV for about ten times longer than any other activity.   I try not to take advantage of this, but if I need to do some real cooking (i.e., making brownies) or make a phone call, I flip on the magic box and I can have up to an hour if I need it.

NOW: They nap once a day, for about 2 hours, but on rare occasions as long as 3.  I’m no longer so exhausted that I need to take my own nap, so I actually use their snooze time to get some writing done.

THEN:  We bathed the kids together and propped them up in bath rings.  That helped keep them safe and minimize squirming.  Bathing was always a two-man job, with Drew standing inside the tub washing one tushie and me sitting on the rim, washing the other.

NOW: We used those bath rings until the kids were 2 years old, which I’m pretty sure is the world record.  That’s around when bathing finally became a one-Daddy job.  Thankfully, Drew usually ends up being that Daddy.  That’s my reward for making it through the day.

THEN: Parents of singletons, it must be nice using shopping carts.  There are very few two-seater carts out there, so I would take my kids in the double stroller to Target or Trader Joe’s, then load up the stroller canopy with groceries.  I’d watch it sag down over their soft, tiny heads as I added more stuff, and when it seemed like an avalanche was imminent, I headed for the cashier – fast.

NOW: It’s pretty much the same, although usually, Drew goes to Ralph’s on his way home.

THEN: Snap N Go car seats are supposed to be a convenience for the new mom.  But for a parent of twins, they’re a workout.  I used to carry those two seats down to my garage, with a diaper bag slung over my shoulder.  It was almost exactly like the trombone/bookbag scenario. I kept a spare t-shirt in the car at all times for days when I was just too sweaty to carry on.

NOW: I announce, “Time to go!  Grab your pacifier and your lovey and meet me at the door!”  And with some prodding, they actually do it.  We hold hands in the garage so everyone stays close, and when we climb into the car, Bennett jumps into the front seat and fiddles with the CD player and the hazard lights, giving me time to strap Sutton in.

So to new parents of twins, know that the job is manageable and that, to borrow a phrase from Dan Savage, it gets better.  Sometimes I meet a pregnant woman who’s expecting twins and who is terrified.  She asks me how I’ve managed to handle mine without having a nervous breakdown.

For them – and for all of you out there wondering, my advice is simple: Do what you can do, and when you need to, just take a break and switch hands.