I read a lot of parenting books before my kids were born, but none influenced me as much as the song “At the Ballet” from A Chorus Line.

It’s sung by three women, each recalling in turn how her miserable childhood at the hands of lousy parents drove her to that most destructive of lifestyles, dancing.

Maggie sings last.  Actually, she does some spoken monologue thing where her voice nonetheless goes unaccountably up and down in pitch because she’s just that perturbed.  She’s pissed at her dad because he ditched the family right after she was born.  She used to hold her arms up in the living room, waiting for him to show up and lift her triumphantly like a swan or something.  Also, in her fantasy, Daddy was an Indian Chief, but that’s not really relevant.

Everything was beautiful at the ballet.

Raise your arms and someone’s always there.

If you want to see a grown man cry, play me that part of the song.  Never fails.

I don’t really have any sense of rhythm.  I certainly know nothing about ballet.  And if I were Native American, there’s no way anyone would make me the chief.  I have every excuse to avoid dancing with my kids.

Yesterday, they were acting a little wild, and I needed a break.  I turned on the TV, then retreated to the other room to do a little writing.  Ten minutes later, Bennett came running in.  There was a perky song on their show, and they had both climbed down from the couch to run around like lunatics, as 2-year-olds are known to do.

I don’t remember what I was doing at the moment.  It really didn’t matter.  “Bennett,” I said.  “I would love to.”

I know I’m not a perfect dad.  I’m not the best athlete or cook or nurse.  I’ve been procrastinating on potty training for a long time now.  My Pigeon voice sounds just like my Bus Driver.  If my kids want to perform sappy monologues about me when they grow up, they’ll probably have plenty of material to work with.

But there’s one thing they can count on: when they raise their arms in the living room, I will always – always – be there. 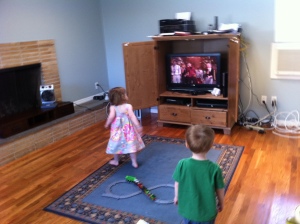