Four years ago, I wrote about my first trip to Disney World with my husband Drew and our kids. It was something I’d always wanted to do, and it so far exceeded my expectations that I pretty much decided that any time we got to take a family vacation, we’d go back. As I said back then, the best part of our trip was meeting Cinderella’s Fairy Godmother, because she was so unbelievably sweet to us and our kids.

That post went semi-viral, and we heard from lots of Disney fans and cast members past and present as a result. Many of them had their own wonderful stories about the Fairy Godmother and how charming she was. A couple of people said they’d pass my post along to her and make sure she got a chance to read the nice things I’d said about her. But I had no idea whether she ever actually read it or even heard about it.

Two years ago, we took our second family trip to Disney World, and this time, there was nothing we were looking forward to more than seeing our old friend.

Sadly, though, she was nowhere to be found.

We asked lots of cast members about her, but no one knew for sure what had happened to her. There were rumors she’d been let go or been sent off to the new Disneyland in Shanghai. Still, every day, we walked by Cinderella’s castle hoping she’d magically appear. We had a great trip, but we were sad when we had to leave without getting a chance to see her.

Last week, we took our kids to Disney World again for their spring break from school. This time, Drew and I tried not to get our hopes up. It seemed impossible that she would be there, and even if by some miracle she was, what were the odds she would remember us or my little blog post from four whole years earlier? It was half our kids’ lives ago, after all.

When we got to the Magic Kingdom, we checked the Disney app, which tells you where you can find every character in the park, but Fairy Godmother wasn’t listed. So the kids and I discussed which of the big-ticket rides we wanted to go to first: Peter Pan’s Flight or Seven Dwarfs Mine Train. Drew just shook his head. “Come on,” he said, leading us toward Cinderella’s castle.

He at least had to check. 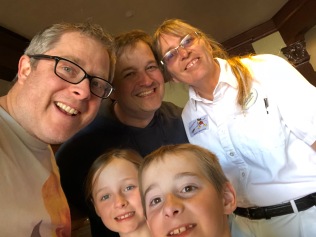 If you go to the Magic Kingdom, look for Miss Sherilyn around Fronteirland. Tell her Jerry and Drew said hi!

But the Fairy Godmother wasn’t there. Four or five times that day, we walked by the spot where we’d first met her, but she never showed up. We did meet some other awesome cast members like our new friend Sherilyn (pictured here) and a nice guy named Mikel who gave my kids a taste of the new Avatar ride when they were too nervous to go on it. Plus, Cinderella’s wicked stepsisters were a hoot. Anastasia was wicked in all the best ways. She told us how much she loved our family, and she even got engaged to our son Bennett. (After first checking that he had money, of course.)

Not that we ever had any doubt, but it was obvious that Fairy Godmother isn’t the only incredibly special person working for Disney. We knew we probably wouldn’t actually get to see the lady herself, but there were plenty of other people there to make our trip special.

A few days later, we got to the park early for the opening ceremony. Just before the rope drop, music played and some characters came out for a song and dance to welcome us. The kids and I craned our necks to try to see through the crowd, but we only caught fleeting glimpses of some of the characters. “I think that’s Belle!” I said, though I wasn’t sure. “Or maybe Captain Hook?”

Then, Drew, the tallest of our smallish crew, pointed over the heads of a million tourists and said with perfect clarity, “There she is!”

I was still in denial. “The same one?”

After that, roller coasters and teacups were not our priority. That whole morning, we kept walking past the castle in the fateful spot where we met the Fairy Godmother four years earlier.

… until at last, there she was.

It was her. The Fairy Godmother, taking pictures, signing autographs and interacting sweetly with little kids and their families.

We got in line, practically hyperventilating with excitement. “No way she’ll remember us,” I said.

“Then we’ll remind her,” Drew replied. He pulled up my blog post on his phone, and as we moved up through the line, we wondered what we were in for.

“Well, hello!” she said, when it was our turn. “Last time I saw you, it was over there!” She pointed across the walkway at a shady underpass near a gift shop.

“Yes!” Drew said. I didn’t remember at all, but apparently, she sometimes stood in a different spot. Could it be that she actually remembered our last meeting better than I did?

Well, she did. She gave us giant hugs, and she talked to us like it had only been a couple of days since we’d seen her, instead of four years. She told us she did see the blog post, and it meant so much to her. She said she thought about us often, because we were such a special family. My kids were dazzled, not just that she remembered us, but at how she got down and spoke to them like old friends, curious to hear all about them. Drew was so moved, he was in tears.

We spent a minute catching up, and I told her that since we last saw her, I’d written a book about Cinderella, My Rotten Stepbrother Ruined Cinderella. One of my favorite characters in it is Cinderella’s fairy godmother, who’s a little miffed that Cinderella didn’t get home by midnight like she was supposed to. The real Fairy Godmother couldn’t have been nicer and even told me she was going to pick up a copy. Then, we moved along, because Fairy Godmother is very popular and had plenty of other people to see. We hung out for a second and watched as she greeted all of the next guests as warmly as she did us and made them all feel just as special. 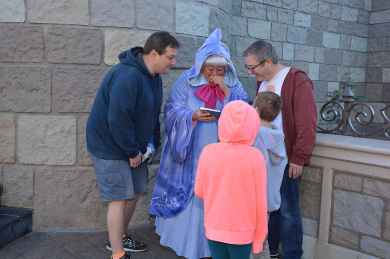 Fairy Godmother with my book!

We couldn’t leave Orlando without seeing her one more time, so on our last day, we waited in line outside the castle again. This time, I  brought along a copy of my book to give her. She told our kids they were lucky to have such wonderful daddies and to be part of such a special family. She gave us each a hug and a kiss on the cheek and told us that she loved us.

I still think being different brings with it wonderful benefits you can never imagine.

This happened because we had the great fortune to meet a fairy godmother.

And because she is magic.

And I can’t wait to see her again when we go back in two years.

Hey, did you know that in addition to the occasional post about being a gay dad, I write kids’ books? It’s true! Help me feed those adorable kids in the pictures above by checking out my website for my childrens’ writing and by visiting my author page on Amazon, Barnes & Noble or wherever you like to buy books. Hooray! Books!