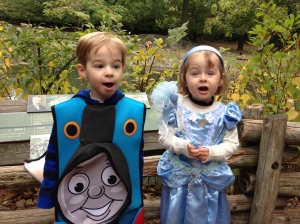 Just about the most horrible thing you can ask a kid, other than “Do you want to watch Barney?”, is “What do you want to be when you grow up?”

My kids are 3 years old. You really expect them to have their lives mapped out already? If you ask my kids what they want to do later that afternoon, they’ll say, “Eat cookies.” That’s how much thought they’ve given to the future. But you want them to imagine a day when they’re paying into social security? Geez, let them be kids for five seconds. If you’re going to start pressuring them about their future, why not give them a sample SAT test while you’re at it?

How many jobs do you think my kids can even name? Around now, I’d guess 3: stay-home dad, TV executive and exploradora.

So I was a little disappointed when I found out their teacher asked them just that question. C’mon, I had a hard enough time picking a major in college. Can’t they just spend pre-pre-Kindergarten making snowflakes with construction paper and safety scissors?

OK, fine, the damage was already done, so I asked what they said.

“I want to be a train conductor!” Bennett announced.

“And I want to be a princess!” Sutton cheered.

It was worse than I’d feared. My kids were cliché.

I was going to discuss it further, but I wasn’t sure what to say. I mean “a princess”? Am I supposed to take that seriously? Should I have scolded her? “Would you really think about this? This is your life we’re talking about!” Better yet, am I allowed to hold this against them someday? “Hey, you said you wanted to be a train conductor. I’m not paying for law school!”

We were in the middle of getting some renovations done on our bathroom, and when we got home, there was a contractor in our front yard mixing cement.

“Hey, can you show the kids what you’re doing?” I asked. “It looks cool!” Princess, my ass, I thought. I’m going to show you kids what a job is.

I already knew the contractor loved the kids, so I figured he’d be on board. “Grab a shovel!” he told them. “You can help!”

So my kids learned to mix cement, and from the way they talked about it afterward, it was probably the most thrilling thing they’d ever done. (Good thing the contractor didn’t make them stick around and watch it dry.)

I admit, I felt good about myself. Instead of asking my kids to narrow down their options for the future, I was expanding their concept of what was possible, introducing them to something new.

It’s how I feel about most things my kids do. If my son wants to wear a dress, great. Let him know how it feels to wear one. He has plenty of time to figure out his identity, so I’m not going to try to pin him down. I’ll just consider it a non-issue and appreciate his desire to explore. I make sure he knows that I’ll love him no matter what. It’s his job to figure out the “what”.

We told Drew all of this as soon as he got home that night. How they picked out their future professions in school and how, afterward, they learned a new trade. While Drew was wrangling them for bathtime, my cell phone rang. Private number. I wouldn’t usually pick up, but for whatever reason, I did.

“Hello Gerald? It’s Doctor ____. We just got the results of your blood test, and I have some bad news.”

Yeah, it was one of those calls.

“You have an extremely elevated potassium level. Because it is life-threatening, you need to get retested right away to see if we got an accurate reading.”

“Our urgent care facility closes at 9pm, so if you can’t make it there by then, you’ll have to go to the emergency room. I’d really recommend you go to urgent care.”

I don’t know how much of the call Drew overheard amid all the kids’ shouting and running around, but apparently, the word “life-threatening” had gotten through. I could tell that much from his petrified expression.

“Do you want us all to come with you?” he asked. His face had completely drained of color.

It was only when I saw how Drew was looking at me that the term “life-threatening” really sunk in. It was as if he thought he might never see me again.

I hugged the kids and told them I loved them. What more could I do? Whisper “Goodbye forever!” just in case?

“Will you be back when we go to bed?” Bennett asked.

I don’t know how I made it through the 15-minute drive to the doctor’s office. I kept thinking if the potassium didn’t give me a heart attack, my anxiety about the potassium surely would. How did I get so much potassium in my blood anyway? Fucking bananas!

The urgent care center was closing down as I walked in. The gift shop was dark and gated up already. Janitors mopped the entranceway, and there were no more patients in the waiting room. I walked up to one of the two receptionists, and she gave me a form to fill out.

Under “Reason for visit”, I wrote, “Blood test”. When I handed it over, she shook her head. “Oh, sorry, honey. The lab is closed.”

She passed the form back to me. “Hold on,” the other receptionist said. “You Mahoney? Oh, yeah. Dr. ____ called about you!” She grabbed the form and nodded. “Have a seat.”

This was not comforting. If there’s anywhere you don’t want to feel like a VIP, it’s at an urgent care facility.

The receptionist picked up her phone. “He’s here!” she barked.

A few seconds later, a nurse rushed out. “Mr. Mahoney?” I couldn’t tell if the nurse was rushing because she was worried about my potassium or if she was just anxious to go home for the night. She brought me back to an exam room. Along the way, everyone we passed looked up at me, as if wondering, “Is that him?” I almost expected one of them to call out, “Dead man walking!”

Within about half a second, the nurse had taken a new vial of blood and strapped me in for an EKG. “Are you a little nervous?” she asked.

“There are a lot of false positives on this test. That’s why we retake it.” She finished the EKG, ran a printout to the doctor and then pointed me back toward the waiting room. “We’ll have the results in about 15 minutes.”

15 minutes is not a long time, unless of course you’re waiting for blood test results or, worse, sitting through 15 minutes of a Terrence Malick film. Much like it did during The Thin Red Line, my mind began to wander.

Death… my dad died when he was 61… I would be 41… I was 28 when my dad died… my kids would be 3 when I died… I have a lot of wonderful memories of my dad… My kids would probably forget what I looked like… Am I really going to die tonight? Here? Should I tweet something?

I used to think about death a lot when I was a teenager. It was just kind of a rite of passage as a gay kid, I guess. Depression, alienation, death. Too much Smiths music. But there was one thing that always brought me back, that gave me hope, and that was thinking about the following summer movie season. Stop thinking about death, Jerry. It’s a great time to be alive. There’s a new Back to the Future coming out!

I didn’t understand how people could commit suicide, and it had nothing to do with all the hurt loved ones they’d leave behind. Weren’t they curious as to what Spielberg was cooking up for next Memorial Day weekend?

Sitting in that deserted urgent care waiting room, there wasn’t a single movie I wanted to see or place I wanted to visit or experience I wanted to have in my life. My bucket list was complete, except for one thing. It was the only thing I could think about.

I just wanted to watch my kids grow up.

They’re such amazing people at 3 1/2, but who will they be at 18? Or 30? A train conductor and a princess? Right now, that was the best information I had. Something told me it might not stick.

I realized in that moment that all I’ve seen of my kids so far is a coming attraction — a teaser, really — and the old kind. The kind that doesn’t give away all the good stuff. I need to see how their story turns out. I don’t want to die. I can’t die.

I want to watch my kids grow up.

“Mr. Mahoney,” the nurse said. “Come on back.” She was smiling. So either the test results were good, or she was just happy that after this, she could punch out of her shift.

“We have about 2 or 3 of these false positives a year,” the doctor explained. “The blood starts to clot before they get the reading and hemoglobin antigens capillary stat…”. I’m not going to try to recap the medical explanation for why they scared the crap out of me for no reason. All I heard was that I wasn’t going to die. 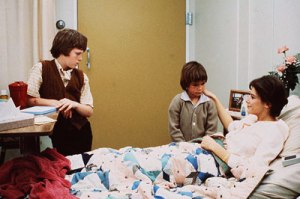 I know the sitcom version of my brush with death would end with me learning some big life-affirming lesson, like not to take the important things for granted. But honestly, I feel like I already know that. You know Debra Winger’s “I know you love me!” speech from Terms of Endearment? Well, I subject my kids to that every time they get mad at me, just in case I slip on a sock puppet and break my neck against the train table before we get a chance to make up. It could happen.

This wasn’t a wakeup call about my health either. The urgent care center didn’t send me home with a stern warning to eat better or exercise more. Just, “Bye!” It was a lab error. I could’ve stopped for a taco grande and a skillet cookie on my way home, and don’t think I didn’t think about it.

But I realized that, if I went right home, I could actually make it there before the kids went to bed. I could tuck them in, tell them I loved them for — who’s counting? — maybe the 1,012th time that day and, best of all, ask them what they wanted to do tomorrow.