I’m ashamed to admit that I wasn’t familiar with the story of Ruby Bridges until my son brought a picture book about her home from school. For those of you who are also uninformed, here’s the TL;DR version:

In 1960, schools in New Orleans were still segregated by race. A judge ordered that a 6-year-old girl named Ruby Bridges be allowed to attend a school that was, until then, all-white. When she showed up on the first day, she was met with scores of furious, shouting protestors trying to scare her away. She went inside anyway and sat in a classroom with the one teacher who’d agree to teach her. Unwilling to attend an integrated school or simply intimidated by the mob, EVERY SINGLE WHITE STUDENT stayed home.

Ruby was the only kid in school, but she kept coming back, day after day, until the protests finally subsided and the white kids started returning.

When I first read about this little girl’s amazing life, I had several thoughts, including:

It’s hard as a parent not to have that last thought. Surely, the world is a better place because Ruby Bridges’ parents allowed and encouraged her to go through something no 6-year-old should ever have to endure (but which, sadly, at the time, was fairly commonplace). How many of us, though, would put our own children in such a vulnerable spot, knowing the harm that could come to them, just for the benefit of the greater good?

Lately, people have been asking that same question about blogger Kristen Howerton.

Here’s the TL;DR version of her story:

via Rage Against the Minivan, with permission

Kristen has a beautiful family consisting of her, her husband, their two biological daughters and their two adopted sons. As you can see from the picture, not everybody in the family is the same race. Kristen writes thoughtful, moving pieces about race and adoption, as well as thoughtful, moving pieces that are not about race and adoption. She posts pictures of her family and uses their real names on her blog Rage Against the Minivan.

Recently, a white supremacist group targeted Kristen with a campaign of hate, stealing and altering photos of her kids, tweeting racial epithets and other jackassery. Kristen’s followers rallied to her support and helped shut down the haters, but many other people thought Kristen was at fault for putting her family on display in the first place. You can read more here and here.

I was lucky enough to share a stage with Kristen several years ago at a Listen To Your Mother reading in Los Angeles. I was inspired by her family and felt a kind of connection to her as a gay dad. People give our family funny looks, too, and much of the world is built around a concept of family that doesn’t include a family like mine. I loved the fact that she wrote about it so openly, and I’ve tried to do the same with this blog. I’ve talked about being a gay dad, and I’ve shared pictures of my family, like this one: 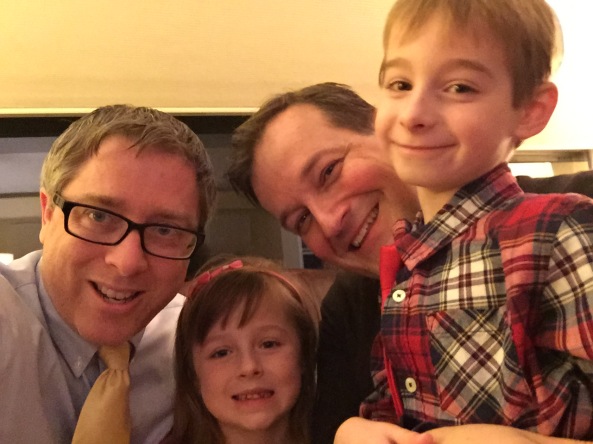 There have been times that I’ve stopped and wondered if what I was doing was wise. What if some homophobes used my pictures in an anti-gay ad or on some hate site? There are prominent figures who’ve suggested that their followers should kidnap children who have gay parents. The danger from these people is real.

So what am I thinking?

But every time I’ve wondered if I should stop doing what I’m doing, I end up even more determined to keep doing it. I know that will lead a lot of people to judge me and even to question my parenting. I know that if anything like what happened to Kristen ever happens to me, there will be people who will say I deserved it for putting my family on display.

You want to know why I still do this? Let me do my best to list the reasons.

It does more good than harm.

I get messages all the time from people who appreciate what I do. I hear from gay parents who are glad to see other families like theirs. I hear from young gay people who are inspired to see that a happy family life is possible for them. And I hear from plenty of straight people who thank me for helping them to understand something that’s foreign to them, or to say how much they can relate for one reason or another.

Do I sometimes get hate mail? Of course. But it doesn’t really bother me much because it’s far, far outnumbered by the positive responses I get.

I dread the thought of my kids being the targets of anyone’s hate. But if my husband and I didn’t put them out there, they wouldn’t see all the love the world has to show us, too.

You think you get a lot of attention for writing blog posts about your non-traditional family online? Try just leaving your house.

Everything we do together as a family invites scrutiny — getting groceries, going to school, playing at the playground, taking our kids to Disney World or doing a million other things. Every time we go out in public we open ourselves and our children up to the possibility of critical glares and even outright hostility. It’s not posting online that makes us potential targets of the hatemongers. It’s just existing.

But you know what? Hardly anything bad ever happens. For the most part, the reactions we get are amazing. People embrace us, show curiosity, compliment us. Last year, a few weeks before the Supreme Court’s ruling on gay marriage, a complete stranger who’d been sitting near us in a restaurant approached us with tears in her eyes and said, “You have a beautiful family! I hope the Supreme Court does the right thing!”

The bullies don’t get to set the debate.

Plenty of people believe they have some good points to make about why two men shouldn’t have kids together. (Or why white families shouldn’t adopt black kids. Or why little girls should get shouted down for trying to go to school. Or [insert some very important opinion here].) OK, if that’s you, you’re entitled to speak your mind. But don’t expect to espouse views that I find offensive and dangerous without hearing from me in return.

You can be vile and bigoted, you can harrass me and level death threats from behind the veil of relative anonymity the internet provides you. I’ll continue to defend myself openly, with logic, reason and probably sarcasm just for fun.

Just get this straight: I’m not going away.

And I refuse to teach my kids that we need to hide from the world in order to keep from upsetting crazy people.

I don’t know if I’d have had the guts to make the decisions Ruby Bridges’ parents did, but I’m glad they did.

I believe people are generally good.

I know there’s a chance the wrong people will find my blog and twist it around in some horrible ways. I’m sure if that happened, I would be terrified and furious and do everything I could to protect my kids. But I know something else:

People would rally to my defense. My readers, my friends and my family would support me, as they always do, and whatever dribble of hate got spewed my way would be washed away by a tsunami of love. I’d end up more convinced than ever that the world has my back.

I hate seeing what’s happened to Kristen Howerton, but it makes me think of the Mr. Rogers quote everyone always posts after a tragedy:

My husband and I have warned our kids that homophobia exists, but I don’t think they believe us. They believe in Santa and the Tooth Fairy, but the notion that people would be mean to someone just because they’re gay sounds completely absurd to them.

It’s not something they’ve ever witnessed.

A couple of nights ago, my husband and I were anxious to start story time so we could get the kids to bed. Our daughter was taking her time coming in, and we were getting really frustrated. We were too tired to get out of bed and round her up, so we shouted downstairs. “What are you doing?”

“Hold on! I’m making something!”

Our daughter is always making things. It’s what she loves to do. So we rolled our eyes and waited.

A minute later, she came running upstairs, with a big smile on her face. She had three post-it notes, and she handed one to me, one to my husband and one to her brother. This is what they said:

I love my family. It came out of nowhere. Just something she was thinking about and which was important enough to delay story time for. I have piles of notes like that, a million little ways my kids show me that they love me and they love our family.

I know most parents have stuff like that. I’m not saying my family is any more special than anyone else’s or that I expect special treatment or whatever some wacko online might want to turn this around into.

And I don’t care who knows it.