Trump voters, you’re upset. I hear you. Let’s start there.

You don’t like all the fuss Hillary Clinton voters like me are making over your guy’s victory. You wish we could just accept things and move on, like good American citizens. We’re all one country, so why can’t we just come together for the sake of unity?

But let me make one thing very clear: you made a colossal mistake.

That guy you elected? He scares the shit out of some of us. He’s said hateful things about us. I don’t mean privately, in an email he never intended for anybody else to see. I mean openly, in his campaign speeches. In his party’s platform. And then he refused to apologize for them. He didn’t misspeak. He wasn’t taken out of context. He owns it.

I think you already know that. Maybe you just didn’t realize how scary it is for the people he’s talking about, or how much it hurts knowing that our own neighbors, friends and family voted for a guy whose election is sure to do us harm.

And make no mistake about it, it will.

Donald has routinely incited violence against people who disagree with him. He’s shown he has no regard for civil liberties. Remember Tiananmen Square, when the Chinese government mowed down a bunch of their own citizens because they were tired of them protesting peacefully? Trump thinks that was the right move.

So if you wonder why people are protesting now, I’m pretty sure part of it is that they’re terrified of protesting once Donald assumes power.

Like it or not, Trump ran on a platform of bigotry. Maybe you heard something else in there, too. I’ll give you the benefit of the doubt on that. You don’t even have to tell me what it was specifically. But to use a Seinfeld term, you can’t yadda yadda the bigotry. It was kind of a big part of it. 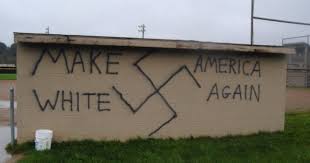 You know who else heard them loud and clear? Bigots. Actual real, proud openly bigoted people. That’s why the KKK endorsed Donald. That’s why there’s been a rash of hate crimes since his election, because bigots got the message that this was their victory, and it was now open season on anyone who was different than them.

You voted for Trump. OK. Now here’s the harsh truth you have to accept: Whether bigotry was a main factor in your vote or simply something you were willing to overlook, this was a triumph for bigotry.

Stop complaining about the protestors and start complaining about the spray-painted swastikas. Start standing up for people when you hear someone yell, “Get out of our country!” at them. And most of all, make sure you let your president-elect know that the hate wasn’t the part of his message that resonated with you.

And please please please, stop saying that you want unity. Unity was Hillary Clinton’s message, and you rejected it for the guy who called Mexicans rapists. What you’re asking for now isn’t unity, it’s submission, and you’re not going to get it.

Why should you? Republicans in Congress and on cable news haven’t offered unity for decades. They’ve obstructed and refused to accept the legitimacy of the last two Democratic presidents. They’ve invented scandals, stoked up anger among their base. They even claimed the last guy wasn’t really born in America. (Now, to add insult to injury, that guy has to hand over the reins of leadership to the guy who led that movement. We’re mad about that, too.)

We didn’t start this. Republicans picked a fight because they didn’t like losing and they thought it was more expedient to cut Democrats down rather than rebuild their own party. They were willing to hold the entire U.S. government hostage to get their way. Remember the shut downs? Those weren’t fun, were they? The Republicans I’m talking about have been betting for years that Democrats were weak and we’d just roll over once we lost one battle. But it’s not going to happen. We’re not going to make this easy on them.

They wanted a fight, and now they’ve got one.

So, Trump voters, pick your side. If you stand by your guy, fine. But then recognize that you’re the enemy.

And before you make your decision, consider this: our side is going to win. There’s no doubt about it.

Clinton got more raw votes than Donald did, and in four years, the Democrats will have an even bigger advantage. Demographics are changing. America is becoming more diverse. Bigots are dying off, being replaced by more progressive and more tolerant younger people.

You can rail against it and win the occasional battle. But in the long run, you’re on the losing team. So stop asking me to join you.

You want us to stand side by side? I agree. So come over here.

I’m not coming to your side. I don’t feel welcome there, and unity can only exist if everyone’s welcome.

Over here, they are. I don’t care what race or religion you are, who you love or what gender you identify with, where your parents or your grandparents were born. I don’t care if you live in a big city or a small town. I don’t care if you’re disabled or you speak a different language. I don’t care about any of it. I’ve used the word “Republican” as a blanket term in this essay, but I don’t mean for it to represent all Republicans. There are some over here on this side, and I like them a lot. The rest of them are welcome to join any time.

I’d even welcome Trump to this side if he’s somehow visited by the ghosts of Christmas Past, Present and Yet to Come and miraculously finds compassion for his fellow human beings.

So there’s your path to unity. Unite with us against hate. It’s an important fight, and we could use your support. Some of our lives literally depend on it.

In the meantime, expect many of us to stay pissed.

And if you stand by your vote for a bigot, sorry to say it, but we’re going to stay pissed at you, too.